Interstate 287 encircles the greater New York City area along a 67.54-mile route in New Jersey and 31.18-mile alignment through New York state. Joining the north end of the Garden State Parkway with the Cross West Chester Expressway east of the Mario M. Cuomo Bridge, I-287 combines with I-87 along the New York Thruway for 19.20 miles.

Beginning at the transition of Route 440 south over the New Jersey Turnpike (I-95) at Edison Township, I-287 leads west to Metuchen, South Plainfield and Piscataway Township. A portion of this stretch was originally slated as Interstate 95, meant to link the route between the NJ Turnpike mainline and the proposed Somerset Freeway alignment southwest to Trenton. I-95 was formally dropped from this alignment in 1982 when the Somerset Freeway was cancelled.1

Beginning its northern turn, Interstate 287 winds around Bound Brook to Somerville, commingling with both U.S. 202 and 206 north to Pluckemin and Bedminster Township. A dual roadway configuration on this stretch separates through traffic from movements with Interstate 78. I-287 was completed north from Edison to U.S. 202/206 (Exit 22) in 1964.1

Climbing onto Second Watchung Mountain at Far Hills, Interstate 287 starts an eastern movement toward New York. I-287 winds through Bernards Township to Morristown, Hanover Township and Parsippany, where it meets Interstate 80. From 1973 to November 1993,1 the freeway ended just north of I-80 in Boonton (Exit 44 / U.S. 202).

The final stretch takes I-287 through Montville Township along Waughaw Mountain to Riverdale, Wanaque and another climb through the southern Ramapo Mountains. There the route turns eastward again, straddling the hillside of Campgraw Mountain through Franklin Lakes to Mahwah Township and an exit from New Jersey at Houvenkopf Mountain. Completion of I-287 took place in August 1994, when the interchange with the New York Thruway (I-87) was upgraded to incorporate high-speed ramps.1

Running east along the New York Thruway from Suffern, I-87/287 travel to Spring Valley, West Nyack and the Mario M. Cuomo Bridge spanning the Hudson River to Tarrytown. I-87 (New York Thruway) turns south at Elmsford toward New York City while I-287 shifts onto the Cross Westchester Expressway, a heavily traveled commuter route east to White Plains and I-95 (New England Thruway) at Rye. 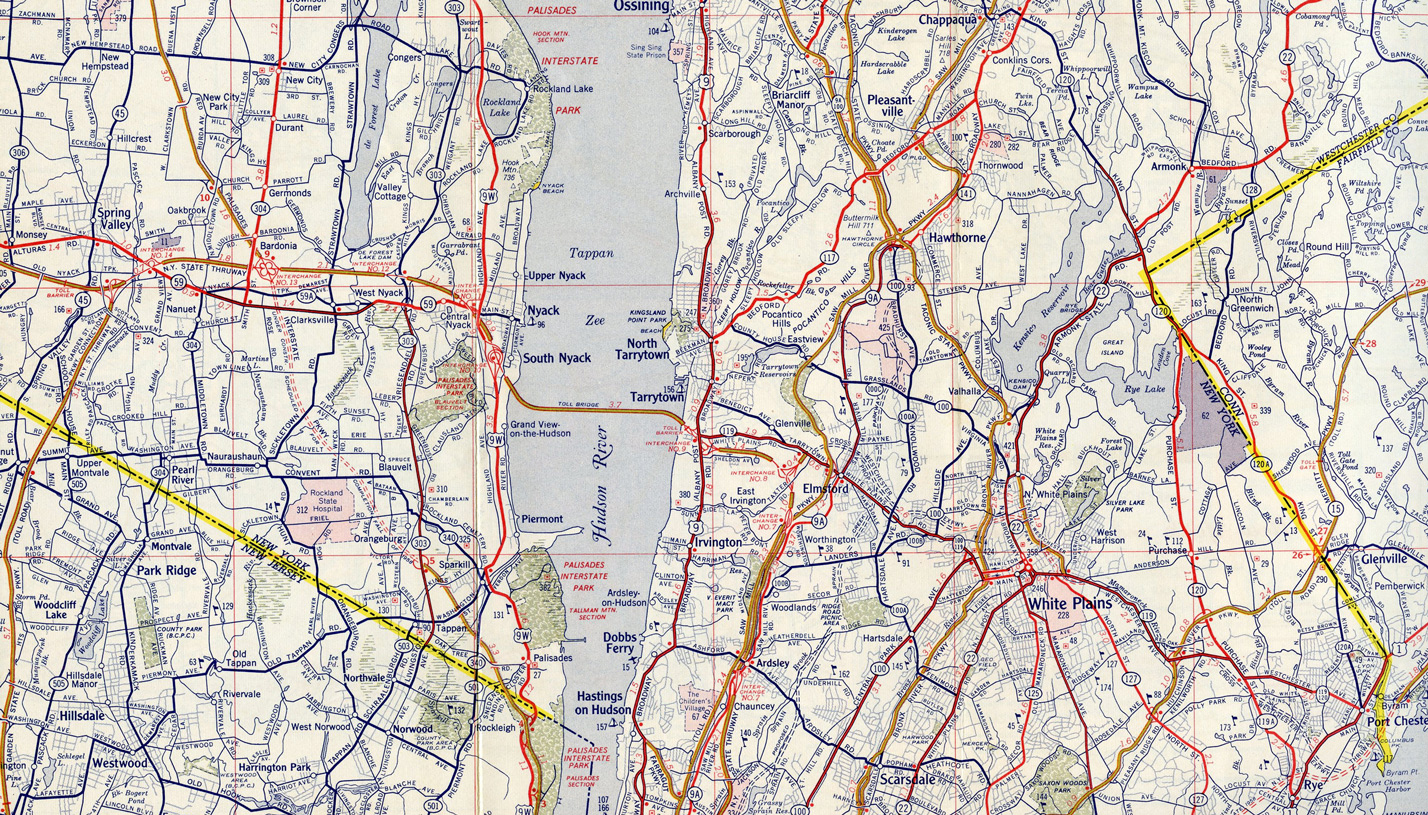 The Cross Westchester Expressway under construction in 1958.

The 10.3 mile long Cross Westchester Expressway fully opened to traffic on December 27, 1960.2 Governor Rockefeller stated at a opening ceremony that the highway was a: