Interstate 293 forms an 11.18 mile loop west from I-93 to Bedford and north along the Merrimack River through the city of Manchester. The east-west portion overlaps with NH 101, a cross-state route from Keene to Hampton Beach. The north-south section doubles as the free section of the F.E. Everett Turnpike mainline.

Construction of the F.E. Everett Turnpike commenced in 1953, with the initial segment open August 20, 1955 from Nashua to U.S. 3/NH 3A (Queen City Avenue) in Manchester. The turnpike opened northward another 17 miles to U.S. 3 (Manchester Street) in Concord on August 29, 1957.1

The east-west portion of Interstate 293 opened as part of the freeway (NH 101) planned between Manchester and the Seacoast in 1961. It was designated as Interstate 193 until 1977, when I-93 was completed through eastern reaches of Manchester.2 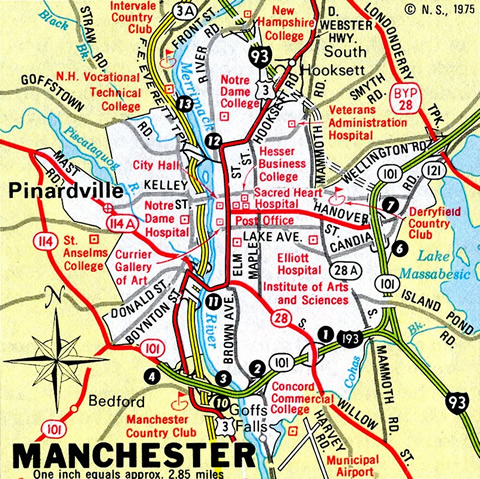 Exit numbers counted up from east to west when Interstate 193 was designated from I-93 west to Bedford. The F.E. Everett Turnpike was unnumbered until 1977.