Interstate 393 constitutes a 4.60-mile freeway spur east from Interstate 93 in Concord to Chichester along side U.S. 4 and U.S. 202. The freeway bypasses the commercial stretch of New Hampshire 9 (Loudon Road) to the north, providing part of a long distance route between the capital city and Spaulding Turnpike at Rochester. U.S. 202 ties into the freeway beginning from Main Street (U.S. 3) to the west. Turn-offs connect the expressway spur west with Commercial Street, though traffic lights preclude this from being a full freeway.

The cloverleaf interchange between Interstates 93 and 393 opened in 1963. It joined the freeway with a multi-lane connector west to U.S. 3-4-202 (Main Street) and east to Fort Eddy Road. A three mile section of I-393 opened east to an at-grade end with New Hampshire 9 (Loudon Road), west of its parclo interchange with New Hampshire 106, in August 1981.1 HB 440 involving the extension of I-393 east to Pembroke was introduced by Representative Gary Dionne in the 1983 legislative session. A study was also authorized during this time period for a limited access highway extending east from Concord to the Spaulding Turnpike at Rochester.2 The eastern leg of Interstate 393 included the realignment of New Hampshire 9. It was completed in December 1988.3 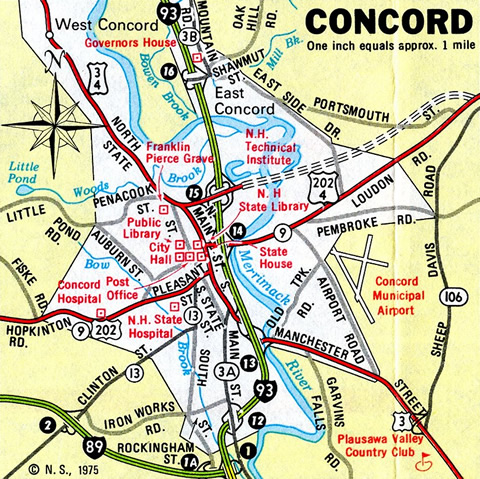