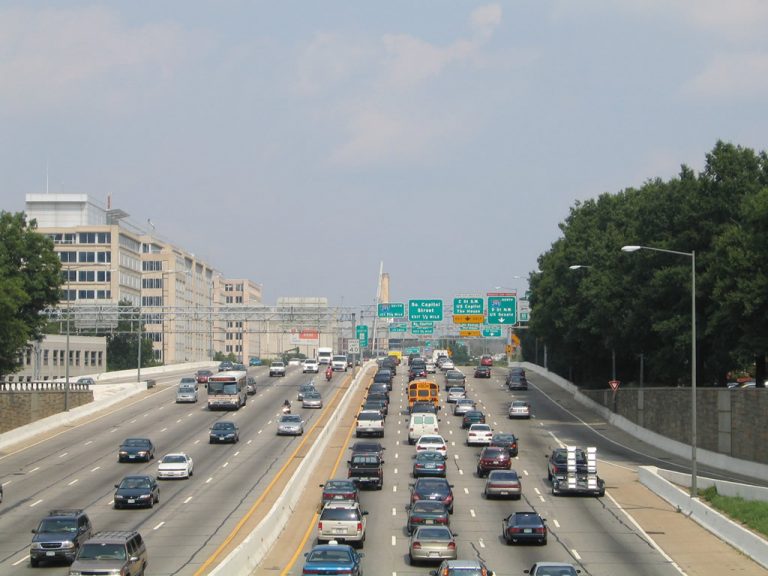 Interstate 395 (Southwest Freeway) east of the 7th Street SW overpass. I-395 turns north along the Center Leg Freeway at the adjacent exchange with I-695 (Southeast Freeway). Photo taken 08/01/05.

Interstate 395 replaced the original route of I-95 north from Springfield, Virginia to Washington, DC. Designated in 1977 when plans for I-95 north of the Center Leg Freeway were cancelled, I-395 follows all of the Southwest Freeway and the completed portion of the Center Leg Freeway in Washington. I-95 shifted from these freeways to overtake I-495 along the eastern half of the Capital Beltway also in 1977.

Interstate 395 serves the Pentagon in Arlington, Virginia, while passing underneath the U.S. Capitol area and National Mall in central Washington. The highway ends unceremoniously at U.S. 50 (New York Avenue) eastbound.

Interstate 395 spans the Potomac River amid three bridges. The 14th Street Bridge consists of the 1950-built Rochambeau Bridge with four lanes northbound and the southbound four-lane George Mason Memorial Bridge constructed in 1962. A third span, opened in 1972, parallels the south side of the George Mason Bridge with four HOV lanes.1 Lanes on these bridges come together at the Washington Channel Bridge leading east onto the Southwest Freeway.

The Southwest Freeway fully opened to traffic on August 26, 1963.1 It included stubs for the Southeast Freeway (I-695) and the Center Leg Freeway. Construction commenced on the northerly component of future I-395 in 1966, but delays pushed back the opening north to E Street NW until November 5, 1973. This portion includes 3,500 foot long cut and cover tunnels.

Extension of the Center Leg Freeway north to its current end at New York Avenue (U.S. 50) includes a 1,250 foot long tunnel from Massachusetts Avenue to K Street NW. Work started on this portion in 1975, but like the southern segment, delays ensued in 1978. Funding to complete the Center Leg was finally obtained by 1984, with work resuming to an opening of the $84-million extension on February 6, 1987.2