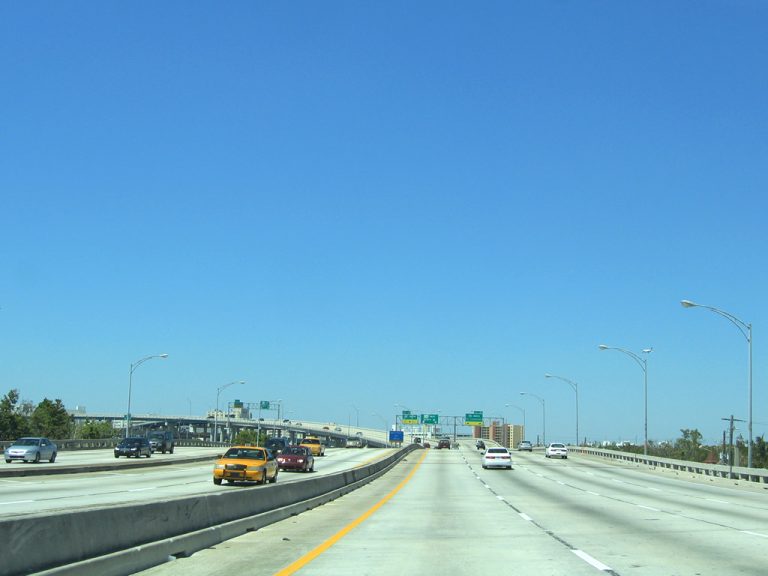 View along westbound Interstate 395 on its approach to the Midtown Interchange. Two separate roadways carry traffic eastbound toward U.S. 1 while one viaduct takes drivers toward Interstate 95. 03/26/06

Serving various interests including Downtown Miami, the Port of Miami, and Miami Beach, Interstate 395 is the designation of the Dolphin Expressway between the Midtown Interchange and the MacArthur Causeway. The western end of the I-395 freeway connects with Interstate 95 and ties directly into State Road 836 at a four-level interchange, while the eastern end defaults onto the MacArthur Causeway carrying SR A1A toward South Beach in Miami Beach. Since the MacArthur Causeway was built prior to the Interstate system and not constructed to its standards, the Interstate 395 designation ends just shy of the causeway across Biscayne Bay. The lone exit along the 1.29 mile course of I-395 connects with U.S. 1 (Biscayne Boulevard). SR 836 is the unsigned counterpart of the I-395 portion along the Dolphin Expressway.

The I-395 spur also provides an essential link to the Port of Miami on Dodge Island via the PortMiami Tunnel (SR 887). Opened to traffic August 2014, the $668.5 million twin-tubed tunnel connects the Dolphin Expressway and MacArthur Causeway with the Port of Miami, now allowing for a seamless connection from the port to area freeways and expressways without using the local street grid.

To avoid any weaving issues, eastbound Interstate 395 consists of dual roadways between the east end of the Midtown Interchange and the ramps to U.S. 1 (Exit 2AB). While an inner roadway carries traffic directly from SR 836, an outer roadway forms from the two ramps stemming from Interstate 95. Both roadways travel in tandem, only separated by a low barrier, until beyond the off-ramps to U.S. 1 (Biscayne Boulevard) where the two converge. Exit 2A departs to U.S. 1 from the outer I-395 roadway while the U.S. highway is accessed from Exit 2B via the inner roadway.

Scheduled to begin in December 2017, an $802 million design-build project reconstructs the entire length of Interstate 395. Improvements include construction of new elevated ramps connecting I-395 west and SR 836 east with I-95, a slight adjustment to its current alignment, a signature arch bridge over U.S. 1 (Biscayne Boulevard), and concrete repaving on I-95. As part of the overhaul, pathways and common activity areas will also be provided under the viaduct expressway.3 Project completion is anticipated in Fall 2024.

Interstate 395 and the extension of the East-West (Dolphin) Expressway was constructed in two phases between 1967 and early 1971, with initial construction between the Midtown Interchange (North-South Expressway) and Miami Avenue north of Downtown. Phase two, started after January 1969, completed the freeway connection to the MacArthur Causeway1 (SR A1A/former U.S. 41) while also providing access to U.S. 1 (Biscayne Boulevard). The entire stretch of freeway officially opened to traffic March 26, 1971.2