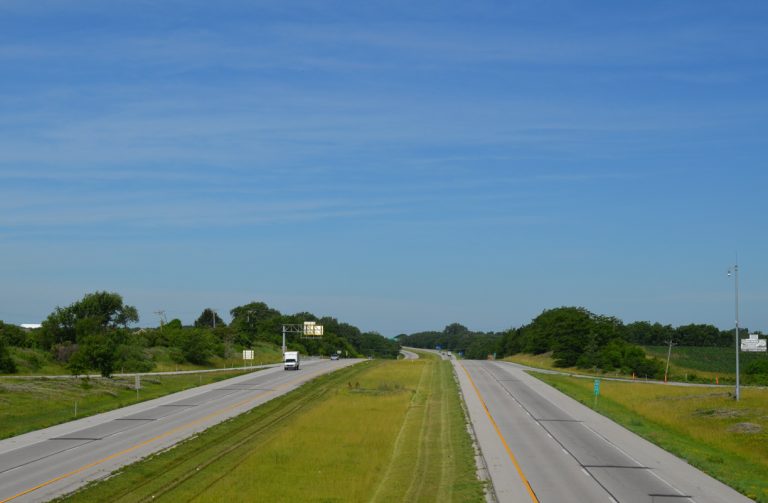 Interstate 435 constitutes a rural four lane freeway across the Northland of Kansas City. This scene looks west from the Woodland Avenue overpass near Nashua. 06/19/15

Interstate 435 encircles Kansas City from Leawood, Kansas east to the Three Trails Crossing Memorial Highway junction with I-49 and I-470, north to near Smithville, west to Kansas City International Airport (MCI) and south across the Missouri River to Kansas City, Kansas. The route provides both a bypass for through traffic between St. Joseph and St. Louis and a commuter route for the suburbs of Claycomo, Independence and Overland Park, Kansas. I-435 also shares a 3.58 mile concurrency with Interstate 29 between MCI Airport and Platte City.

The Kansas City beltway measures 55.179 miles in length through Jackson, Clay and Platte Counties. The portion north from Pleasant Valley to MCI Airport and southwest to Parkville is still rural generally with four lanes. Further south through east Kansas City and toward Grandview, I-435 becomes an extremely busy route with 2015 traffic counts ranging from 70,377 vehicles per day (vpd) at Claycomo to 138,952 vpd east of the Kansas state line.

Eight years of construction, completed in May 2008, redesigned the former Grandview Triangle Interchange in south Kansas City. The exchange joined I-435 and I-470 with U.S. 71 north to Broadway and south to Grandview. Directional and semi directional T interchanges connected the three freeways with left exit ramps and weaving traffic patterns. The $300 million project added lanes, removed left exit ramps and reconfigured three adjacent interchanges along U.S. 71 (now I-49) to the south.1 A formal ceremony held near monuments for the Santa Fe, Oregon and California Trails on Marion Park Drive renamed the interchange the 3-Trails Crossing Memorial Highway on October 3, 2006.2 The name was approved by the Missouri General Assembly in 2005 for the three historic trails.1

The cloverstack joining Interstate 435 with Interstate 70 by the Arrowhead and Kauffman Stadium complex in east Kansas City was improved between 2010 and 2012. With alternatives evaluated in 1999, and an Environmental Impact Statement (EIS) started in 2005, the upgrades to the exchange were added to the statewide transportation improvement plan in 2007. The $32.4 million project was funded by the American Recovery and Reinvestment Act (ARRA). It added new ramps to U.S. 40 from I-435 south and from U.S. 40 to I-435 north while adding a collector distributor roadway to Interstate 70 eastbound from the beltway east to Blue Ridge Cutoff. The new traffic pattern better separates stadium traffic on I-70 east while providing an alternate route to I-435 via U.S. 40.3

A $47 million project reconfigured the exchange joining I-70 with Interstate 435 into a partial turbine interchange. Work eliminating the left exit ramps from I-435 to I-70 and improving the loop ramps from I-70 to I-435 started in Spring 2019. New directional ramps were built from I-435 north to I-70 west and from I-435 south to I-70 east. Construction was completed on October 5, 2020.

Further north, construction from Fall 2016 to September 2019 eliminated a bottleneck along Interstate 435 at Route 210 and consolidated Exit 55A/B into a single exchange. The wye interchange linking I-435 north with Route 210 west directly was eliminated and the diamond interchange with Route 210 at the city of Randolph reconfigured into a DDI. The new DDI opened to traffic on July 31, 2019.4