Interstate 469 is the 31-mile beltway around the city of Fort Wayne in Allen County. The highway is known as the Ronald Reagan Highway, though this name is not used commonly. The interstate is a four-lane concrete highway with a barrier median separating traffic. The majority of the route traverses agricultural fields, though northern reaches pass through the Fort Wayne suburbs. Still, since it goes out of its way as a bypass, Interstate 69 through traffic is more likely to remain on the parent route than use the loop.

Construction started on I-469 in the 1980s, with it temporarily designated as Indiana 469. Once completed in the 1990s, the interstate became the bypass for Fort Wayne, carrying U.S. 24, U.S. 30 and U.S. 33 on their respective courses around the city. 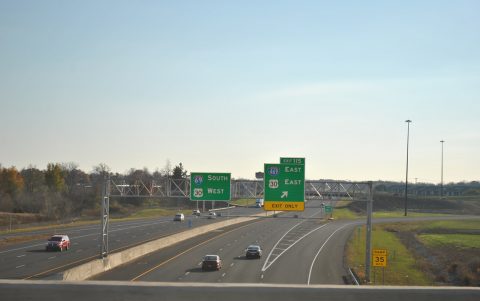