Interstate 505 runs north from I-80 near Vacaville to Winters and I-5 near Dunnigan. The freeway provides a fast route from the San Francisco Bay Area to Northern California and the Pacific Northwest.

Originally incorporated in the Interstate 5W loop west from the Central Valley to Oakland in 1964, initial construction for Interstate 505 took place at the south end with I-80 in 1968. Most of the freeway in Solano County was built in 1974. The Yolo County portion of I-505 was constructed as a two lane highway in 1959, with expansion to four lanes in 1980. 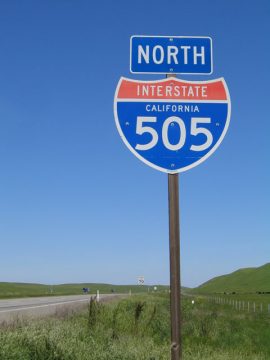 The northern section of Interstate 505 traverses a remote area across the Dunnigan Hills. 03/31/05