Interstate 579 is a 1.5 mile long spur in Pittsburgh. The urban expressway lines Crosstown Boulevard north from Diamond Street between Downtown and Duquesne University to I-279 at the East Allegheny neighborhood. I-579 spans the Allegheny River across the Veterans Bridge from PA 380 (Bigelow Boulevard) near PPG Paints Arena (home of the Pittsburgh Penguins NHL franchise) and PA 28 (E Ohio Street) at the North Shore.

Crosstown Boulevard (SR 3069) extends south from I-579 and ramps with PA 885 (Boulevard of the Allies) to the Liberty Bridge spanning both I-376/U.S. 22-30 (Penn-Lincoln Parkway East) and the Monongahela River. The Liberty Bridge connects I-579 with the Liberty Tunnel at P.J. McArdle Road. The four lane tunnel extends south to an exchange joining U.S. 19 Truck (W Liberty Avenue) and PA 51 (Saw Mill Run Boulevard) by the Beechview and West Liberty neighborhoods.

A steel cantilever bridge with all of the support structure below the deck, the Liberty Bridge opened in 1928. The span predates the construction of Crosstown Boulevard, which preceded modern Interstate 579 by several decades.1 The Veterans Bridge was built in 1987, the year that I-579 was fully constructed.2 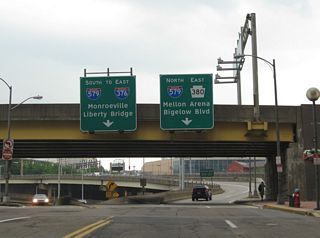 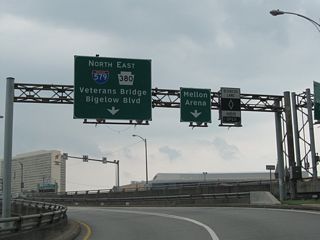 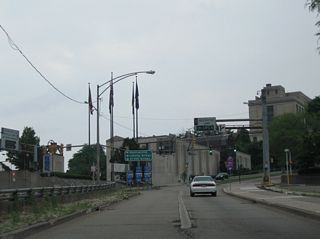 Bedford Avenue separates from PA 380 (Bigelow Boulevard) at Washington Place to Logan Street and the entrance ramp for the I-579 HOV roadway across the Veterans Bridge.
06/12/10 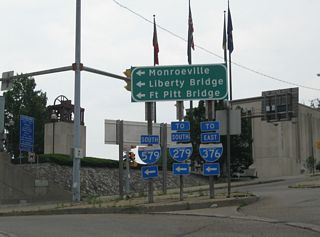 State named shields for all three Interstates serving Downtown Pittsburgh were posted at the southbound entrance ramp for I-579 from Bedford Avenue. The assembly for I-279 was removed with the renumbering of Parkway West as an extension of I-376.
06/12/10 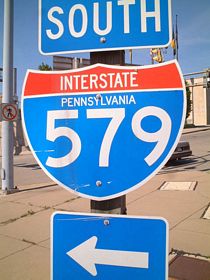 Interstate 579 ends along Crosstown Boulevard south of the on-ramp from Bedford Avenue.
05/25/02 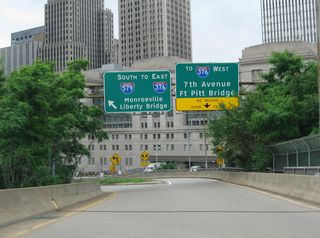