Following the eastern half of the Outer Loop freeway in the Rochester metropolitan area, Interstate 590 joins I-390 with I-490 (East Expressway). The six lane freeway provides a commuter route from the southeastern suburbs to Downtown Rochester via I-490, and a bypass route for Interstate 490 travelers bound for Greater Rochester International Airport (ROC) and I-390 south to Henrietta and Corning.

New York Route 590 extends north from the Can of Worms Interchange joining I-490 and I-590 along the Sea Breeze Expressway as a freeway to NY Route 104 and at-grade boulevard toward the community of Sea Breeze.

Interstate 590 replaced New York Route 47 along the Southeast Expressway in 1977. The freeway originally traveled the Rochester Outer Loop from west Rochester to Brighton, including the current alignment of I-390. Interstate 390 was to follow the Genesee Expressway north from I-590 to I-490 and the Inner Loop at Downtown Rochester. Community opposition cancelled that project and I-390 was subsequently rerouted over the western half of I-590 to Interstate 490 in west Rochester.

Interstate 590 previously ended at a three-wye interchange with I-490 at Brighton, adjacent to a second three-level exchange joining Interstate 490 with NY 590 (Sea Breeze Expressway). Due to their close proximity, routine congestion and weaving traffic became an increasing problem. Completed in 1991, the Can of Worms project consolidated the separate interchanges by realigning the Outer Loop and Sea Breeze Expressway to meet directly at a new multi level interchange with I-490 (East Expressway). 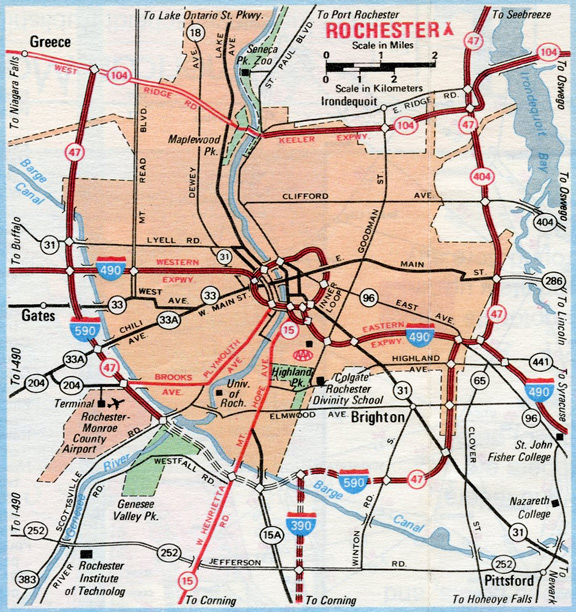