Interstate 635 encircles the city of Dallas along the eastern and northern sides of the city. Known as the Lyndon B. Johnson Freeway, or LBJ for short, the route provides a commuter route for the many corporate headquarters and other workplaces along its corridor. IH 635 carries six lanes or more through Mesquite and up to 14 lanes to the north in conjunction with the tolled LBJ Express lanes. The freeway is generally heavily traveled during most times of day.

The LBJ Express lanes fully opened to traffic on September 10, 2015, after four years of construction. The toll lanes run between the general travel lanes, both above grade and through trenched freeway sections known as the LBJ Canyon. The managed lanes utilize dynamic tolling with rates varying depending upon time of day and overall traffic congestion. The LBJ Express lanes tie into the TEXpress Lanes leading south along the Stemmons Freeway (IH 35E) toward Downtown Dallas. 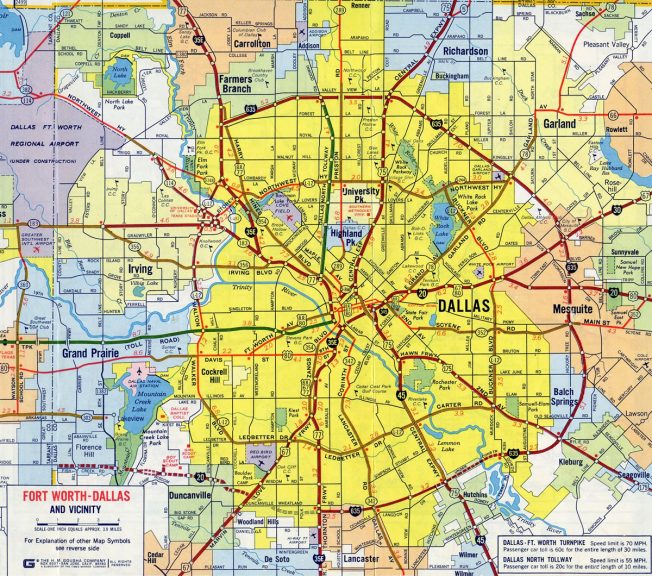 Dallas - 1972
The maximum extent of Interstate 635 took the freeway in a complete semicircle east of Interstate 35E around Dallas. I-20 was redirected over the southern leg of I-635 one year later.