Interstate 675 angles northward from Interstate 75 at Stockbridge to Interstate 285 in south Dekalb County on the Southside of Atlanta. The 11.04-mile freeway provides an alternate route between I-285 and I-75 while also doubling as a commuter route to the Clayton County suburbs.

Construction on I-675 commenced in December 1982. The $61.6-million project was delayed when one of the subcontractors defaulted on the job in 1985. Interstate 675 opened to traffic on October 30, 1987, three years after anticipated and $20 million over budget.1,2

Interstate 675 follows the southern extent of the planned Interstate 475 / Georgia 400, which was slated to run from Clayton County north to Buckhead in Atlanta and Interstate 285 at Sandy Springs. I-475 was applied to the west Macon Bypass, which opened in 1967. The Georgia 400 freeway north of I-285 in south Dekalb and south of I-85 at Buckhead was never built, and the portion between Buckhead and Sandy Springs was constructed as a toll road.

Future road work involving Interstate 675 takes place starting in 2019 at the north end. The I-285 Bouldercrest Interchange Improvements project adds collector distributor roadways to both sides of the Perimeter Highway to separate weaving traffic between I-675 and Bouldercrest Road (Exit 51). 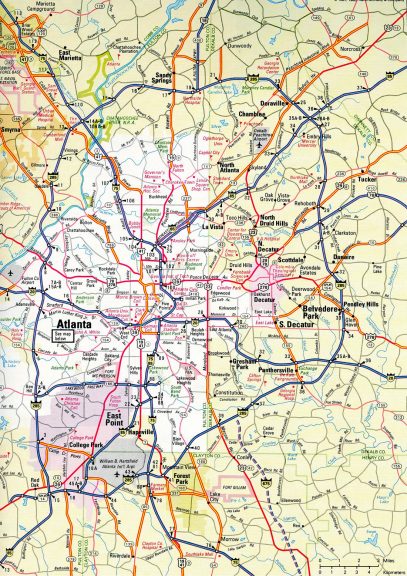