Views of Kane'ohe Bay and the Ko'olau Range from a vista point along Interstate H3 westbound. Photos taken 01/17/11.

H-3 is Hawaii's most beautiful and controversial freeway. Covering 16.1 miles from the Halawa Interchange north to Kaneohe MCAS, the freeway opened in 1997, 25 years after the initial construction on the North Shore and 37 years after the route was first proposed.

As part of statehood, a network of interstate highways was proposed for Hawaii. H-3 was designed to run from Pearl Harbor to Kaneohe MCAS, to serve troop and equipment movements across the island.

Due to priorities being H-1 and H-2, H-3 started incurring delays. H-3 was the first project in Hawaii to require an environmental impact statement, and the selected route, through Moanalua Valley, ran into intense community opposition. North shore residents were opposed to H-3, as they didn't want their side of the island to become as urbanized as Honolulu.

Construction began by 1972 between the Pali Golf Course and MCAS Kaneohe on the North Shore, and on the Halawa interchange. The remaining section between Halawa and the Pali golf course was tied up in litigation, with the planned route still traversing Moanalua Valley. 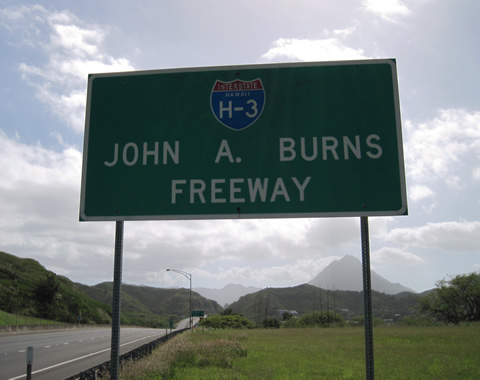 The following is a timeline on litigation and delays in H-3 construction:

As research and construction began on H-3 through Halawa Valley, several native Hawaiian burial sites were destroyed. Opposition through the late 1970s up to the present time to H-3 centers around these native Hawaiian spiritual sites. Ironically, it is believed that the Moanalua Valley route today would have had the least impact on native Hawaiian cultural sites.