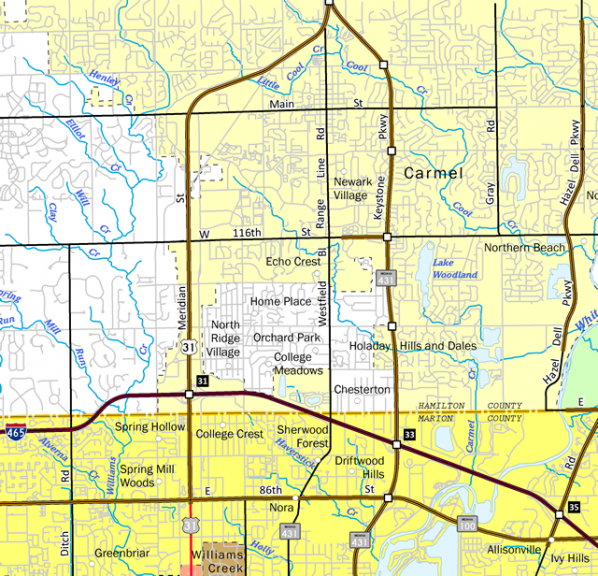 Indiana 431 once existed in two segments; the first was in Johnson and southern Marion County, serving as a "business route" for the former US 31 through Homecroft, Southport, and Greenwood. The second segment ran originally from Fall Creek Parkway (Old Indiana 37) north along Keystone Avenue through northern Indianapolis and into Carmel where it connected with U.S. 31 near Westfield. Over time, as the state and U.S. highways were moved to Interstate 465, Indiana 431 was decommissioned. The last stretch was decommissioned in 2007 as INDOT handed over the segment from Interstate 465 north to U.S. 31 to the city of Carmel.

The city of Carmel, among the most affluent communities in the state and among the most innovative in transportation, over 50 roundabouts are present in the city, came up with a way to improve the road. For years, suburban growth had made the highway congested and INDOT had come up with a plan to widen the highway to six lanes and improve the intersections, potentially with diamond interchanges. When Carmel asked to have the highway, they came up with their own solution: They would keep the four lane configuration and turn all the intersections with elevated "teardrop" roundabout interchanges. The design allowed for Carmel to take up the least space possible and keep it like a freeway. After a few years of construction and a costly budget, the project was finished in 2010 and the effects have been immediate. The road feels like a freeway, it clearly isn't though, but it provides a quicker way from Interstate 465 to U.S. 31, and will serve as an alternate to that highway as it is improved into a freeway in the coming decade. Not surprisingly, some of the interchange designs for the new U.S. 31 freeway through Carmel and Westfield were inspired from the Keystone Parkway project.