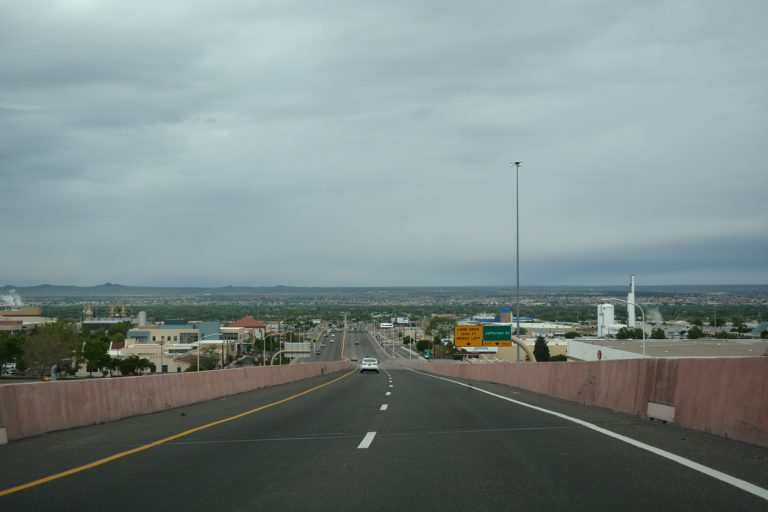 Plans for a new North Valley crossing of the Rio Grande at Montaño Road originated in 1964 with a proposal submitted to the city by the West Side Association, a group of business owners and county officials. Following years of debate, an alignment for a bridge to the West Side was selected further north along El Pueblo Road in 1980. Although not yet funded, it was named Paseo del Norte.1

The 1983 announcement by Intel Corporation to expand its plant in Rio Rancho increased the need for improved roads. With this in mind, the Legislature allocated $6 million for the Paseo del Norte project. Subsequent selling of bonds by the Highway Department in 1985 raised $34 million. Coupled with $4 million from the city of Albuquerque and $2 million from Bernalillo County, the project acquired the funding needed for the construction of a new roadway and bridge linking Coors Boulevard (NM 45) with Second Street (NM 47).1

Community opposition from the village of Los Ranchos and residents in North Valley arose, with four lawsuits filed in 1984 to halt work. House Speaker Raymond Sanchez was also against the bridge. However he led efforts for a compromise in 1985 with the state for the roadway. One concession shifted the responsibility for the proposed crossing at Montaño Road from the state to the city. Changes made along Paseo del Norte included adding grade separations at Rio Grande Boulevard and Fourth Street, lowering a portion of the roadway and adding berms to offset traffic noise. A restriction was also placed prohibiting large trucks from using NM 423 west of NM 47.1

Work eventually started in August 1986 on the 1,425 foot long bridge over the Rio Grande. Opened on December 10, 1987, the span represented $6.14 million of the overall $46 million costs for the roadway between Coors Boulevard and 2nd Street. NM 423 east to Interstate 25 was completed in July 1988. Paseo del Norte west from Coors Boulevard to Golf Course Road was finished in 1995.1

A vote approved $8.7 million in bonds for an extension of Paseo del Norte west through Petroglyph National Monument in 2004. Construction commenced in 2006 following legal opposition, with the new roadway opened in 2007.1

A $93 million design-build project upgraded the exchange joining Interstate 25 with Paseo del Norte between ground breaking on September 5, 20132 and a ribbon cutting ceremony held on December 15, 2014. The main aspect of the work was a high speed flyover linking northbound I-25 with NM 423 west. Four other bridges built included overpasses for Jefferson Street and the southbound I-25 frontage road across the freeway entrance ramp from NM 423 eastbound. A previous plan called for a full systems interchange spreading across a larger foot print. Estimated to cost $360 million in 2011, the Paseo / I-25 interchange was eventually scrapped due insufficient highway funding. Furthermore voters rejected a $25 million bond proposal by Albuquerque Mayor Richard Berry to help fund the work. These events resulted in transportation officials drafting the scaled back interchange that was ultimately built.3 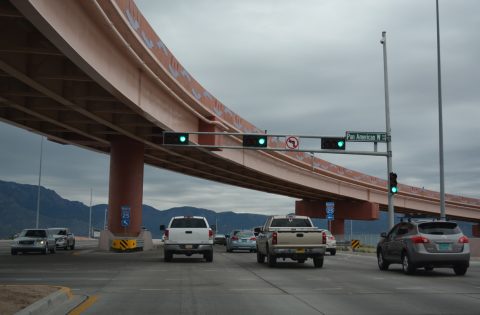 The city of Albuquerque plans on widening a 1.5 mile section of Paseo Del Norte from two to four lanes on the far West Side. $2.1 million was allocated in 2019 toward planning, design and right of way acquisition, which is expected to run through late 2020. Handling around 20,000 vehicles per day, the section is located between Kimmick Drive and Universe Boulevard. Construction costs, including the addition of bicycle lanes and sidewalks, will likely top $20 million and take 12 to 14 months to complete.4