OR 99 follows the route of Old U.S. 99, mostly following Interstate 5 between Ashland near Siskiyou Summit and Eugene. North of Eugene, OR 99 divides into OR 99W and OR 99E in Junction City, with OR 99W passing through Corvallis and McMinnville and OR 99E serving Albany and Salem. The two routes converge in Portland at the foot of the Interstate Bridge over the Columbia River, although significant segments of both OR 99E and OR 99W have been decommissioned and shifted to city maintenance.

U.S. 99, the Pacific Highway, was the main north-south route between northern California, western Oregon and western Washington. U.S. 99 served the cities of Ashland, Medford, Grants Pass, Roseburg, Eugene-Springfield, Albany, Salem, and the greater Portland metropolitan area. The completion of Interstate 5 replaced the need for U.S. 99, and in 1971 the highway was decommissioned and renumbered as Oregon Route 99. The majority of old U.S. 99 was retained in the state route system, however several segments bypassed by I-5 were turned over to county maintenance. Sections of OR 99 overlap with I-5 from Ashland north to the Columbia River.

Within the city of Eugene, U.S. 99 combined with U.S. 126. The two highways overlapped along Franklin Boulevard west to Broadway, Mill Street, and the one-way couplet of 6th/7th Avenues. U.S. 126 was relocated to a freeway in 1971 and decommissioned in 1972. Oregon Route 126 Business follows the former surface street alignment through both Downtown Eugene and Springfield. OR 99/OR 126 Business overlap as their predecessors did from Interstate 105 east to I-5. 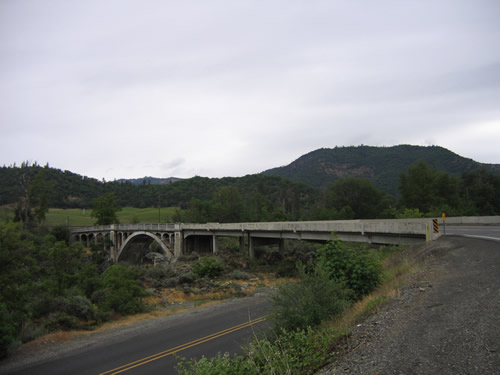 Known also as the Old Pacific Highway Bridge, the Rock Point Bridge spans the Rogue River at Rock Point west of Gold Hill in southern Oregon. Opened to traffic in 1920, the concrete arch span replaced a covered bridge built in 1859. Operated by the Rock Point Bridge Company with tolls collected, the span was later purchased by Jackson County and made into a free crossing.1