The city of Prichard is located on the north side of Mobile in Lower Alabama. Incorporated in 1925, the 25 square mile municipality mostly consists of residential streets, with an older business district centered around Wilson Avenue and Main Street. The Prichard city limits spread far to the north through rural areas along U.S. 45 to Kushla. Population numbers have steadily declined since 1960, with a loss of 25,000 residents by the 2010 census.

Interstate 65 angles northeast across Prichard from U.S. 45 (St. Stephens Road) to Interstate 165 and the Chickasaw city line. I-165 spurs southeast by the city center to the Alabama State Docks and Water Street in Mobile. U.S. 43 runs along the east side of Prichard, from U.S. 90 (Bay Bridge Road) north into Chickasaw. U.S. 45 extends northwest from Mobile through the height of Prichard en route to Citronelle in north Mobile County. U.S. 90 (Bay Bridge Road) straddles the Mobile and Prichard city line from its split with I-165 to the Cochrane-Africatown Bridge across the Mobile River.

Alabama 158 constitutes a four-lane expressway across northwest Prichard between County Road 31 (Newburn Road) and I-65 at Saraland. The route was extended west of U.S. 45 as part of the planned relocation of U.S. 98. Alabama 213 connects the Eight Mile community in Prichard with Saraland to the northeast along Shelton Beach Road. Alabama 217 (Lott Road) branches west from U.S. 45 at Eight Mile to northern reaches of Semmes and Georgetown.

U.S. 43 is named for John Craft throughout the state of Alabama. Craft Highway south through Prichard and U.S. 45 in Mobile was the alignment of U.S. 43 in 1947. It was redesignated as U.S. 43 Alternate when U.S. 43 shifted east onto Telegraph Road.

One-way frontage roads accompany both sides of the I-165 viaduct north from Bay Bridge Road (Exit 2) to Whistler Street (Exit 1A). The two to three lane roads were built in conjunction with the 1994-completed freeway to link I-165 with the various cross streets in the city. Texas style U-turn ramps join the roadways at Bay Bridge Road, by Dr. Martin Luther King, Jr. Drive, Wilson Avenue and near Price Avenue.

Lovejoy Loop encircles the Prichard business district along Wilson Avenue. The loop formed part of one-way couplet for Alabama State Route 193, before Wilson Avenue was built in between. The two to three lane loop was restriped to two-way traffic by 2011.

A one time through street connecting the Prichard city center with U.S. 45 (St. Stephens Road) at Boaz Street, Main Street angles west from Prichard Avenue and City Hall and north to pass under I-65 and end at Eightmile Creek. 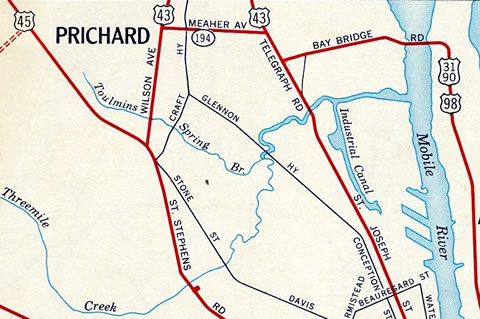 Alabama State Route 194 followed Meaher Avenue from Wilson Avenue (former U.S. 43, U.S. 43 Alternate, and SR 193) to U.S. 43 (Telegraph Road) through central Prichard. The west end of the street was demolished with construction of Interstate 165, with the street redirected northward onto Bernard Street.

Paper Mill Road loops northwest from the industrial Magazine area by the Cochrane-Africatown Bridge to the intersection of U.S. 43 (Telegraph Road) and Diaz Street in Prichard.

Wilson Avenue constitutes the main route north from U.S. 45 (St. Stephens Road) through the Prichard business district to U.S. 43 (Telegraph Road) in Chickasaw. The urban arterial represents the original route of U.S. 43 from its former overlap with U.S. 45 to Craft Highway through Chickasaw. When U.S. 43 shifted east to Telegraph Road, Wilson Avenue was redesignated Alternate U.S. 43. SR 193 followed Wilson Avenue from at least 1952 to 1977 as well.

Wilson Avenue used to split into a one-way street couplet utilizing the Lovejoy Loop through the Prichard city center. Sometime after 1977, Wilson Avenue was constructed between the loop as a continuous road.

Photos covering other principle streets throughout the Prichard area.