Tennessee State Route 155 forms a 35-mile long belt line around central Nashville. The 21-mile portion north of Interstate 40 consists of a full freeway (Briley Parkway). Leading south from the west end of Briley Parkway at I-40, SR 155 transitions into a five-lane commercial boulevard along White Bridge Pike through the White Bridge community. Woodmont Boulevard extends the route east from U.S. 70S (Harding Pike) along a two-lane road to the Woodlawn Area, Woodmont Estates and Battlement. Thompson Lane expands SR 155 into a four-lane arterial across U.S. 31 (Franklin Pike) and Berry Hill. Briley Parkway takes over as SR 155 turns north from Woodbine and Glencliff to Glengarry and western reaches of Nashville International Airport (BNA). This stretch of the route comprises an at-grade expressway.

Construction at the west end of Briley Parkway added high speed flyovers in a two phase project. Completed in 2005, the first phase included the new flyover ramp from I-40 west to SR 155 north and from SR 155 south to I-40 east. Funding issues delayed the start of the second phase until money was made available from the American Recovery and Reinvestment Act (ARRA). The $32-million Interstate 40/White Bridge Road Interchange Modification Project ran from July 2009 to August 2011.1 It added flyover ramps from I-40 east to SR 155 north and a new ramp from Briley Parkway south to Interstate 40 west. Work also replaced the White Bridge Road overpass and a nearby pedestrian bridge above the I-40 mainline while adding five retaining walls. 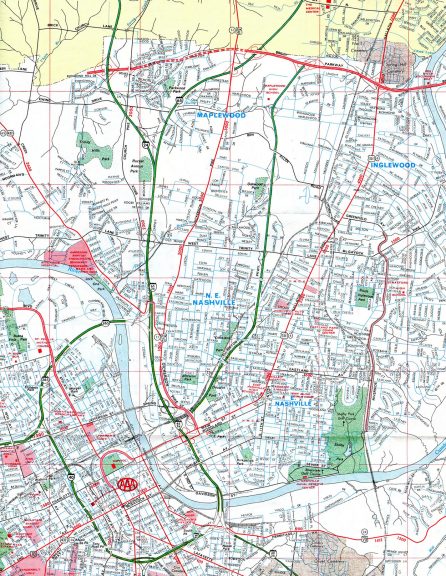 The freeway portion of SR 155 along Briley Parkway was complete from I-65 southeast to I-40 by 1985. A short connection was also open between I-24 and adjacent Brick Church Pike.