Stretching 317 miles through Florida, U.S. 17 generally travels along the spine and heartland of the Florida peninsula. The route connects the southwest coast with both the central and northeast portions of the state. Though a bit slower travel time than both Interstate 75 and I-4, U.S. 17 provides a more direct link between the Fort Myers-Cape Coral-Punta Gorda and greater Orlando metro areas. Portions of the U.S. highway have been improved from Punta Gorda to Winter Haven providing faster and safer travel. Through Kissimmee, Orlando and its neighboring cities, U.S. 17 follows U.S. 92 along a heavily congested commercialized corridor. The two split at DeLand with U.S. 17 returning to a rural setting en route to Palatka and Jacksonville. The U.S. highway parallels close to I-4 between Orlando and De Land and I-95 between Jacksonville and the Georgia state line.

U.S. 17 begins at U.S. 41 in Downtown Punta Gorda and heads northerly toward Arcadia while paralleling the Peace River. Road projects spanning between 2003 to 2015 widened U.S. 17 into a four-lane rural highway between Charlotte County 74 and DeSoto County 760A in Nocatee. A final project completed in January 2018 widened U.S. 17 from CR 760A to Heard Street in Arcadia1, connecting with the existing one-way pairs through the DeSoto county seat.

North of Arcadia, U.S. 17 continues as a four lane rural corridor to the Hardee County line. The community of Brownsville was bypassed when the route was placed on new alignment by 2006, generally following an old rail line that paralleled U.S. 17 between Arcadia and points north. Two separate projects further extended the widening of U.S. 17 from the Hardee County line to Zolfo Springs. Widening from the Hardee County to Sweetwater Road ran from September 2016 to Summer 2018. Construction expanding the highway from south of West 9th Street to north of West 3rd Street in Zolfo Springs was finished in March 2018.1

U.S. 17 leaves Zolfo Springs for the towns of Wauchula and Bowling Green before entering Polk County. U.S. 98 joins U.S. 17 in Downtown Fort Meade for an 11-mile overlap through East Van Fleet Drive in Bartow. U.S. 98 briefly connects with State Road 60 before spoking northwest to Lakeland. U.S. 17 turns northeast from the Polk County seat making a bee line for Winter Haven. The route formerly followed one-way pairs through and near its central business district but today travels wholly along both 3rd and 6th Streets within the city. Lake Alfred Road carries U.S. 17 northward from Winter Haven to rendezvous with U.S. 92 south of Lake Alfred.

U.S. 17 joins U.S. 92 for a 99-mile concurrency through the heart of central Florida and the greater Orlando metro area. The two highways merge just south of Lake Alfred and turn easterly to meet U.S. 27 west of Haines City. The pair then turn north traveling through Davenport, Loughman, and Intercession City before entering Kissimmee within Osceola County. 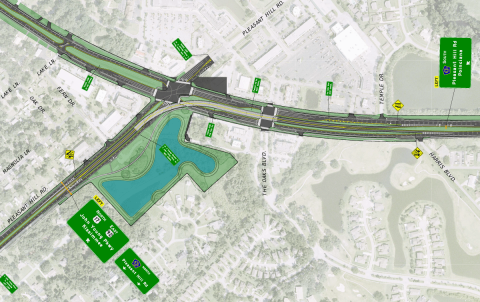 Separate projects widen U.S. 17-92 along John Young Parkway in Osceola County. The first project expands a 1.37-mile segment from Portage Street north to U.S. 192 (Vine Street) in Kissimmee. Work commenced on November 15, 2015 and was estimated for completion on January 25, 2018. Poor weather conditions and clean up following Hurricane Irma in September 2017 were cited as delays, pushing the completion date back to late May 2018.2

U.S. 17 and 92 both join U.S. 192 for a brief overlap before returning north, following U.S. 441 (Main Street) out of Kissimmee. Beyond the city limits, Main Street becomes Orange Blossom Trail (OBT), a heavily congested six-lane arterial that carries the three U.S. highways through several Orange County suburbs, including Hunters Creek and Southchase. The trio meet both the Florida's Turnpike and Beachline Expressway (SR 528) near SR 482 (Sand Lake Road) and the Florida Mall. U.S. 17-92-441 continues northward along a commercial corridor into Orlando, splitting with U.S. 441 at State Road 50 (Colonial Drive). Colonial Drive takes U.S. 17/92 along with SR 50 east under Interstate 4 before the two U.S. highways depart north along Mills Avenue.

U.S. 17/92 were realigned in 2018 away from the Lake Monroe waterfront along Seminole Boulevard along a combination of SR 46 west and County Road 15 (Monroe Road) north. The former alignment along Seminole Boulevard was turned over to local control and subsequently closed in 2019 for storm water repairs. SR 46 extends west from U.S. 17/92 toward Wekiva Parkway while Monroe Road leads the two routes northward to Interstate 4 at Lake Monroe.

A $22.3 million project redesigned the interchange joining Interstate 4 with U.S. 17/92 and County Road 15 (Monroe Road) at Lake Monroe. A flyover ramp was added from I-4 eastbound to U.S. 17/92 at the intersection with Monroe Road. The previous off-ramp tied into Orange Boulevard west of CR 15 (Monroe Road) and south of a CSX Railroad line and U.S. 17/92. Work finished four months ahead of schedule on December 19, 2007.4 U.S. 17/92 span the St. Johns River from the exchange with I-4 across the Benedict Bridge into Volusia County.

The remaining 15 miles of the U.S. 17-92 concurrency parallel to Interstate 4 to the north through DeBary, Orange City and DeLand. Drivers typically see a mix of residential and commercial areas along the entire stretch into DeLand. Woodland Boulevard carries U.S. 17/92 to the heart of DeLand where the two U.S. highways meet State Road 44. U.S. 92 finally leaves U.S. 17 along International Speedway Boulevard in North DeLand for Daytona Beach. The U.S. highway continues another 22 miles ending at SR A1A one block west of the Atlantic Ocean.

Leaving U.S. 92 and De Land behind, U.S. 17 turns northwest toward De Leon Springs and Barberville, reducing back to a two-lane rural highway. The highway generally parallels the St. Johns River as it continues northward through the communities of Pierson, Crescent City and Lake Como en route to Palatka and beyond. At Satsuma, U.S. 17 bends northeast in unison with the St. Johns River to meet SR 100 at San Mateo. State Road 100 joins U.S. 17 for an overlap through East Palatka into Palatka across the St. Johns River. U.S. 17 (Reid Street) splits with SR 100 west of downtown for Green Cove Springs and Orange Park, a suburb of Jacksonville. The U.S. highway maintains a rural setting between Palatka and Green Cove Springs, but is more urbanized northward toward Orange Park.

Approved by AASHTO in 2006, U.S. 17 was relocated from a surface street routing through the Riverside and Brooklyn neighborhoods in Jacksonville onto a combination of Roosevelt Expressway, Interstate 10, I-95, and U.S. 23 (State / Union Streets). The move was requested by city officials, as the former couplet of College and Post Streets through Riverside was converted to local streets with two way traffic. The realignment also effected SR 228, which ran in tandem with U.S. 17 to Downtown. It now follows U.S. 17 wholly to U.S. 1/90 (Main / Ocean Streets), which returns the route south to Monroe and Adams Street east to the Hart Bridge Expressway. U.S. 17 and SR 228 remain poorly signed along their overlaps with Interstates 10 and 95.

North of Downtown, U.S. 17 follows Main Street through the Brentwood and Panama Park neighborhoods before crossing the Trout River near the Jacksonville Zoo. U.S. 17 remains a mostly rural route between I-295 and Yulee, where the U.S. highway meets SR A1A/200. Turning northwest, the route meets I-95 at a folded diamond interchange before curving back north to cross the St. Marys River into Georgia.