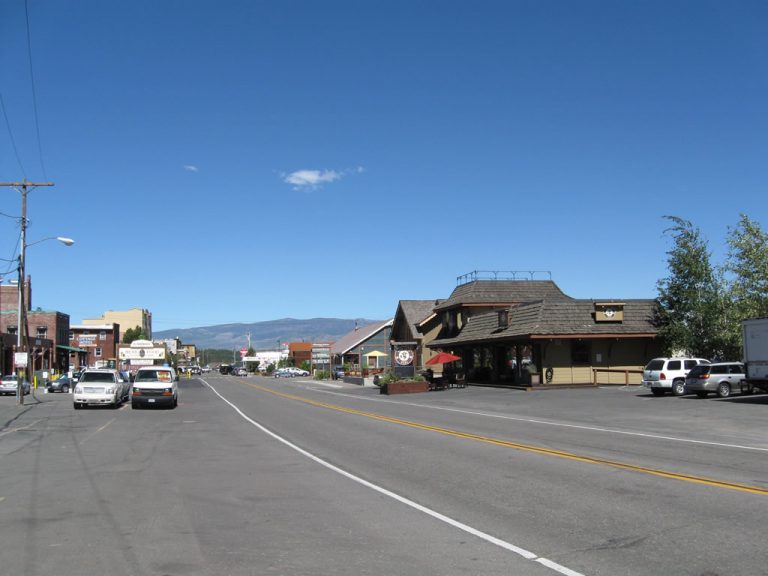 Historic U.S. 40 follows Donner Pass Road through Downtown Truckee. This view looks east along the historic route toward the intersection with Bridge Street (Brockway Road / formerly SR 267 before it was relocated east of Downtown). 07/21/09

Having been truncated east to I-80 at Silver Creek Junction, Utah, U.S. 40 is a former transcontinental route from San Francisco east to Atlantic City, New Jersey. U.S. 40 no longer exists as an official route in California, Nevada and western Utah. Within the Golden State, U.S. 40 was mostly replaced by Interstate 80 between Downtown San Francisco and the state line near Verdi, Nevada. Some old alignments of historic U.S. 40 remain in the state highway system (such as California State Route 123 and Business Loop I-80 in Sacramento). Many sections of the original route (and later realignments) remain intact and in some cases carry Historic U.S. 40 signs. The U.S. highway was truncated from San Francisco to the California-Nevada state line in 1964 (signs were removed starting in 1966). The rest of U.S. 40 that overlapped Interstate 80 between Reno and Park City, Utah was decommissioned in 1975.

Prior to 1993, the former route of U.S. 40 through the town of Truckee was designated as Business Loop I-80. The business route followed Donner Pass Road between Exits 184 and 188. No evidence of the business loop remains in Truckee, as a roadway expansion and pavement replacement project in the early 2000s resulted in the removal of the last "Route 80 Business" sign along Interstate 80 westbound.

Victory Highway: U.S. 40 also followed the Victory Highway from San Francisco east toward Utah and points east. The section of U.S. 40 between Sacramento and Reno was known as the "Big Bend Route" of the Lincoln Highway and is also called the Victory Highway. This auto trail was established in 1921 and was designed to connect San Francisco and New York City via an alternate route instead of the Lincoln Highway. At the California-Nevada state line was an eagle monument that dedicated the Victory Highway "to California-s sons and daughters who served their country in the World War 1917-1918 and to the memory of those who gave the last full measure of devotion." This plaque was relocated in 1960 to Downtown Truckee, and it sits in the parking lot at the train depot that now serves as an official California Welcome Center and tourist information center. Most of the route west of St. Louis followed U.S. 40; the Victory Highway was especially notable for the alternative to the U.S. 50 (Lincoln Highway) across northern Nevada.

U.S. 40 used to have a long alternate route in Northern California that extended into Reno, Nevada. In 1964, U.S. 40 Alternate between Sacramento and Reno was also eliminated. This all-weather route followed portions of SR 113 (former U.S. 99E), SR 99, SR 20 and SR 70 (former SR 24) between 1954 and 1964. U.S. 40 Alternate used to pass through Yuba City, Oroville, Quincy and Portola (via the Feather River Canyon) en route to Hallelujah Junction. Longer than the main route of U.S. 40, U.S. 40 Alternate provided a lower elevation course through the Sierra Nevada instead of the higher route via the narrow and steep Donner Pass summit.