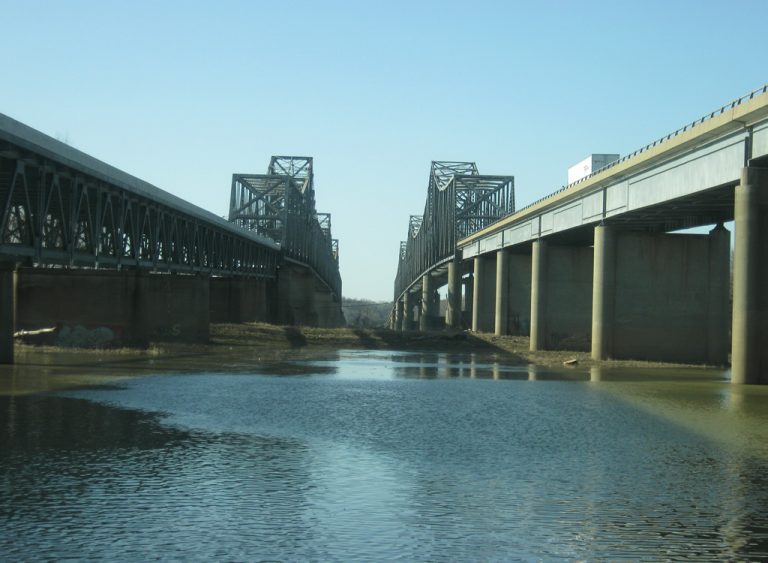 A view of the Bi-State Vietnam Gold Star Twin Bridges that U.S. 41 uses to span the Ohio River into Henderson County, Kentucky. The twin bridges, typically called the "twin bridges" by locals, were built in 1932 (northbound span) and 1966 (southbound span) and connect the larger Evansville area with Henderson to the south. Among the crossings between Indiana and Kentucky, these are the only bridges that cross the Ohio River solely in Kentucky. A new bridge for Interstate 69 will be built to the east of these bridges to provide a second crossing between the two communities. However there is no timetable for the construction of the new (and presumably toll) bridge. Photo taken by Thomas Decker (03/06/12).

U.S. 41 travels for 280 miles along the western border of Indiana from the Northwest Indiana suburbs of Chicago south to Indiana's third largest city of Evansville. Nationally, U.S. 41 goes for 2,000 miles from Copper Harbor, Michigan to Miami, Florida. At one time the U.S. 41 corridor was planned as the north-south toll road for Indiana to complement the east-west toll road up north. Although it is not a toll road, it is still a major highway for most of its routing, with Indiana 63 filling in the gap for the sections that aren't four-lanes. U.S. 41 was twinned through the years beginning in the 1960s across western Indiana, and with the exception of the stretch from Terre Haute to Attica, is a four-lane highway across the state. Along with the Indiana 63 expressway in Vigo, Vermillion and Warren Counties, the highway is among the most important non-interstate routes in Indiana, providing a long-haul route from Chicago to Evansville and points south.

Due to a shift in the Ohio River's path, U.S. 41 enters Indiana north of the river and enters the Evansville area as a busy highway. From Evansville, U.S. 41 continues north past the communities of Princeton, Vincennes and Sullivan as a part of a major highway between Evansville and Terre Haute. North of Terre Haute, U.S. 41 becomes a two-lane highway that travels through Rockville and Attica while Indiana 63 serves as the primary four-lane expressway to the west. North of Attica, U.S. 41 meets up with Indiana 63 and continues as a four-lane highway across the flat farmlands of Northwest Indiana. Finally, the highway enters the urbanized part of Northwest Indiana in the communities of St. John, Schererville, Highland and Hammond before exiting the state at the border with Chicago, Illinois.