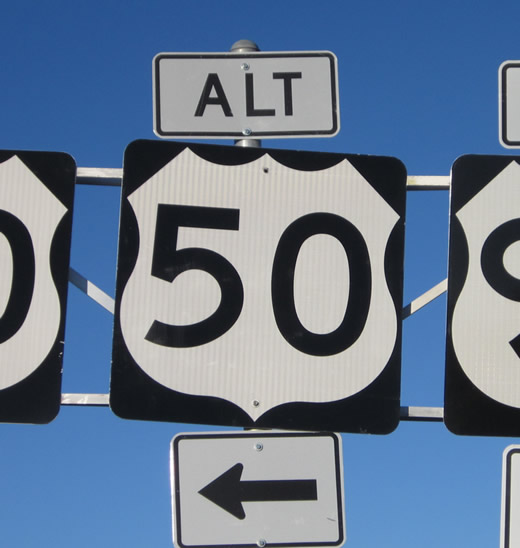 U.S. 50 Alternate travels north from U.S. 50 at Silver Springs alongside U.S. 95 Alternate to Fernley, then southeast through Hazen to rejoin U.S. 50 near Fallon.

U.S. 95 north of Fallon followed what is now U.S. 50 Alternate northwest to Fernley and then Interstate 80 northeast to Winnemucca until 1962. U.S. 95 was then rerouted east onto Nevada State Route 1A, with the former highway west through Hazen to Fernley renumbered as a branch of U.S. 95 Alternate. U.S. 95 Alternate was already in place from Shurz west to Yerrington and north to Wabuska, Silver Springs and Fernley. It was extended north over what was U.S. 95 along U.S. 40 / I-80 to Winnemucca.

A previous U.S. 50 Alternate route looped north from Ely alongside U.S. 93 to Lages Station and northeast from there to Eastline in Nevada. The US highway continued east into Utah with U.S. 40 to Lake Point Junction outside Salt Lake City, Utah. AASHTO approved the removal of the alternate route on November 12, 1976.