U.S. 98 joins the city of Mobile area with Hattiesburg, Mississippi as part of a regional corridor northwest to Jackson. East from the Port City, U.S. 98 constitutes both an alternate to Interstate 10 (Mobile Bayway) and a commuter route to Spanish Fort, Daphne and Fairhope. The US highway also connects Foley with Pensacola as one of six routes linking Baldwin County with Northwest Florida.

SR 42 overlays all 80.248 miles of U.S. 98 across Mobile and Baldwin Counties. Prior to the 1955 extension of U.S. 98 from Pensacola to Natchez, Mississippi, SR 42 was a stand alone route from Mobile westward. The stretch through Baldwin County was originally designated as SR 89.

Within Mobile County, U.S. 98 quickly reduces from a four-lane expressway in Mississippi to a two-lane roadway through the community of Wilmer. A busy trucking corridor as well, U.S. 98 winds east across northern reaches of Big Creek Lake to the suburban city of Semmes. Named Moffett Road, the US route expands to four lanes at Mobile County 25 (Snow Road). 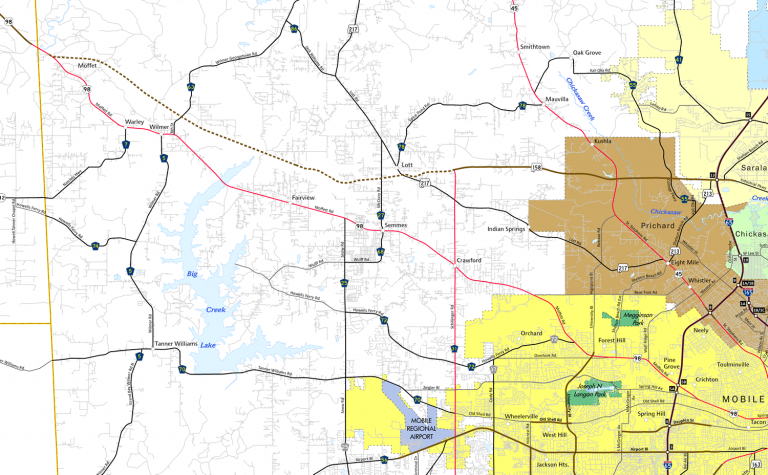 Presently U.S. 98 follows Moffett Road east from the Mississippi state line to Spring Hill Avenue at Midtown Mobile. Long range plans call for the relocation of U.S. 98 north onto a new four-lane bypass of Wilmer and Semmes, but funding delays have prevented completion. Initial grading work was completed by 2009.

A viaduct carries U.S. 98 across the CN Railroad in Semmes. The route touches down at a congested intersection with Wulff Road (CR 68) south and McCrary Road (CR 27) north. East from there, Moffett Road widens further with a continuous center turn lane as U.S. 98 curves southward into West Mobile.

Moffett Road crosses paths with Interstate 65 at a folded diamond interchange using the west and east service roads. A railroad line crosses U.S. 98 at-grade through the junction, adding to delays already caused by slow moving trucks making their way onto I-65 south to connect with I-10 or north to I-165.

U.S. 90 and 98 part ways at their parclo interchange with Interstate 10 in north Daphne. South from there, U.S. 98 represents the main commuter route to the Eastern Shore, joining Spanish Fort with Montrose and Fairhope. The historical alignment of U.S. 98, signed as Scenic Baldwin County 98, runs further west through Downtown Daphne and Fairhope to Point Clear.

Scenic Baldwin County 98 and U.S. 98 come together at Barnwell, where U.S. 98 turns east toward Weeks Bay and Magnolia Springs. The rest of U.S. 98 travels east-west, joining the city of Foley with Elberta, Lillian and the Pensacola area east of Perdido Bay.