The southernmost extent of U.S. 231 travels 66.7 miles through Bay and Jackson Counties in the Florida Panhandle. A four lane corridor throughout the state, U.S. 231 connects Lower Alabama and Interstate 10 with Panama City and resort areas west along the Emerald Coast. Beyond the Panama City area, U.S. 231 remains rural, passing through the settlements of Youngstown, Fountain and the small town of Alford. Through Jackson County, the highway connects with U.S. 90 in the town of Cottondale and State Road 2 in Campbellton.

Plans for building a freeway connector to Dothan, Alabama from Interstate 10 have yet to reach fruition. Recognized federally in 1998 with initial funding, the project however did not advance beyond studies. Funds were eventually redistributed to improvements along Ross Clark Circle (SR 210).1

A subsequent study commenced in 20102 evaluating a freeway bypass west of Dothan from U.S. 231 near Midland City to State Line. Estimated to cost $250 million or more, the highway would aid regional traffic between Montgomery and Panama City.3 A limited access route was never constructed, and moving forward in 2020 the city of Dothan is focused on improving the infrastructure of existing roads.1

Angling southwest from Youngstown, U.S. 231 runs directly alongside the Bay Lines Railroad to areas east of Lynn Haven and to U.S. 98 (15th Street) in Panama City. A PD&E Study conducted by FDOT developed improvements to address traffic congestion along this growing suburban corridor. The bulk of proposed changes are outlined for Segments 1 and 2. Projects advancing forward expand and rebuild a 5.5-mile section of U.S. 231 northeast from 15th Street to Pipe Line Road. 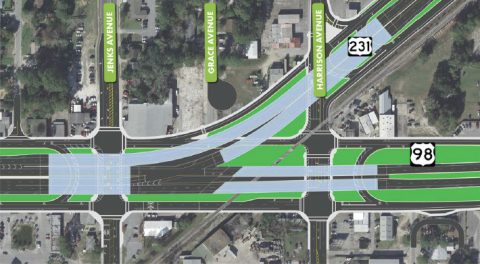 A one mile section of SR 77 will be expanded from a five lane boulevard to a six lane urban arterial between U.S. 98 and SR 368 (23rd Street). This includes elevating SR 77 across U.S. 231 and replacing their intersection with a single point urban interchange (SPUI). These projects are funded for right-of-way acquisition and construction. Bids are expected in Fall 2023.

Project Number 217910-8 further expands U.S. 231 northeast another 3.9 miles to Pipe Line Road. Work outlined here rebuilds U.S. 231 from a four-lane rural arterial to a six-lane urban arterial with bike lanes. Associated work widens one mile of SR 389 within the vicinity of U.S. 231 to a four lane urban arterial. The FDOT Five_year Work Program funds right-of-way acquisition, but road construction is not funded as of 2020.