Washington State Route 504 once carried summer travelers to Spirit Lake, esteemed as one of the most beautiful spots in the Cascade Range. After Mount Saint Helens erupted violently on May 18, 1980, forests were flattened and the once jewel-like lake was filled with ash and logs. In the aftermath, a huge wall of mud, ash, and debris, known as a lahar, raced down the North Fork Toutle River Valley - burying over 30 miles of the original alignment of SR 504 along with it. 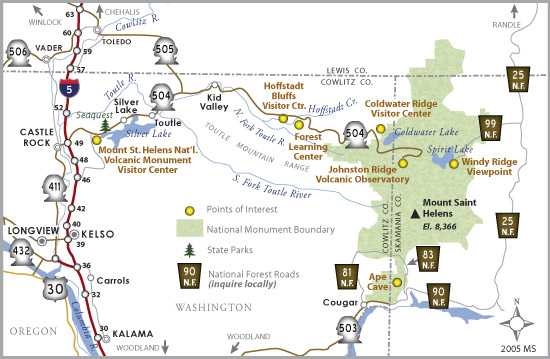 Between 1987 and 1994, the state of Washington rebuilt the highway, this time positioning the roadbed well above the valley floor to guard against future damage from debris and lahars. To cross the many creeks that empty into the North Fork Toutle River along the route, 14 new bridges were built. The first section of the new highway opened in 1992.

Renaming the route "Spirit Lake Memorial Highway," the State of Washington dedicated the highway to the memory of the 57 people who died as a result of the 1980 eruption. In 1998, The Association of Engineering Geologists honored the highway as an outstanding environmental and engineering geologic project.1