Debuted around the year 2000, Clearview font swept the nations highway signs into a new era of type. Featuring a larger lettering scheme with thinner curves and lines, Clearview’s creators contest an increased legibility over the decades-old Highway Gothic. FHWA agreed and approved as part of the Interim Approval for Use of Clearview Font for Positive Contrast Legends on Guide Signs (IA-5) issued on September 2, 2004. Pennsylvania was the first to fully commitment to the new font on all signing projects state-wide. Michigan and Texas eventually followed.

The future of Clearview font appeared uncertain by 2014, as FHWA no longer considered requests for the font as an alternative to FHWA Standard Alphabets. A 2014 request for Interim Approval to use Clearview by the city of Grays Harbor County, Washington indicated that the FHWA expected to rescind overall Interim Approval for the font in the near future.

FHWA eventually rescinded the Interim Approval for Use of Clearview Font for Positive Contrast Legends on Guide Signs (IA-5) on January 25, 2016. The notice discontinued the provisional use of the alternative lettering style in traffic control device applications. Following a 30-day transition period, FHWA Standard Alphabets were mandated on all traffic control devices, except where exempted per the MUTCD. Existing signs still using the provisional letter style that complied with the Interim Approval may remain as long as they are in serviceable condition.

Two additional articles on the FHWA decision to revert to Highway Gothic fonts are “The US government’s decision to scrub Clearview font from highway signs really frustrated its designers” by Quartz and “America’s Sudden U-Turn on Highway Fonts” by Citylab.

Supporters of Clearview font, including the Texas Transportation Institute, lobbied to have language reinstating the use of the type face included in a budget bill signed into law in March 2018. The reinstatement of Clearview factored insufficient research studies on the font, which FHWA will be conducting going forward.

The following list was by no means a complete listing and was updated as observations were made in the field or reported to use by site contributors. Some of the information below was also derived from the FHWA MUTCD List of Authorized Requests for Interim Approval. While the font may be approved in the states listed, implementation of the new signs may not have occurred.

For even more on the Clearview movement, see the New York Times article “The Road to Clarity” and The Clearview thread on the AARoads Forum.

08-25-15 – Added remaining entries for Canada with the help of SignGeek101 on the AARoads Forum. Delisted Ontario (the trial period for Clearview font is over) and Iowa and adjusted New Jersey per other forum feedback.

06-17-11 – Added entry for Alberta, and added changes to various states’ use of Clearview from feedback on the AARoads Forum, an email related to the Indiana East-West Toll Road and from recent observations in Wisconsin. Yellow now refers to some instances, but not state-wide usage. Noted local usages in Indiana and Tennessee. 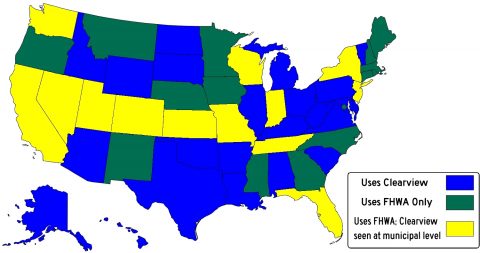 Clearview use in the U.S. and Canada maps created by SignGeek101 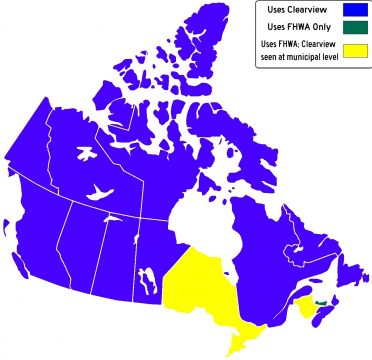 As compiled from research, posts on the AARoads Forum, and noted on social media, the following table lists which font is used for each U.S. state and Canadian province.