Hurricane Katrina slammed the central Gulf Coast with 145 mph sustained winds on the morning of August 29, 2005. The former Category five storm walloped the coastline, sending a 25 foot plus storm surge into Bay St. Louis, Gulfport, and Biloxi, Mississippi, decimating over 80 percent of those coastal communities. The north winds generated from the storm pushed Lake Pontchartrain waters over and through the levee system that protects the city of New Orleans, inundating over 80 percent of the city with 9 feet of lake water. In the days after the landfall, all but 11,000 city residents of the Crescent City were evacuated or had already fled before the storm. All roads leading into New Orleans and roads along the Mississippi Gulf Coast were affected by Hurricane Katrina.

A list of roads that closed due to storm related damage in the Deep South:

Although Baton Rouge was well west of the landfall of Hurricane Katrina, the influx of thousands of New Orleans refuges took its toll on the local area road network. Adjustments to the signals along main streets and arterials, removal of some signals and restricted left-turn access, and the possible restriping of Interstate 110 to allow six lanes of traffic instead of four were underway to improve the situation.3

As of October 18, 2005, all of the major arteries through the New Orleans metropolitan area reopened in some capacity. These include Interstates 10 , 510, and 610, Interstate 55, Interstate 310, the U.S. 11 span between New Orleans and Slidell, and the Lake Pontchartrain Causeway. Tolls resumed along the Crescent City Connection Bridge and the Lake Pontchartrain Causeway. LADOTD 511 provided an overview of storm related closures and http://www.wwltv.com/traffic/ for updated Parish Road closures information.

The 5.4-mile long bridges spanning Lake Pontchartrain between U.S. 11 at Irish Bayou and the North Shore at Slidell suffered tremendous damage. Many portions of the bridge deck were toppled by Hurricane Katrina’s storm surge in similar fashion to the Interstate 10 Escambia Bay Bridges in Pensacola due to Hurricane Ivan the previous year. The Louisiana Department of Transportation and Development (LDOTD) announced on September 9, 2005 that a 45-day $30.9-million project would restore at least three lanes of traffic between St. Tammany and Orleans Parish. Crews first repaired the least damaged of the two spans to accommodate at least one lane of traffic in each direction by salvaging as many of the precast concrete bridge deck portions from the more damaged bridge for use on the least damaged span. In conjunction with that project, contractors affixed the more damaged bridge with temporary metal panels to allow for one lane of traffic on that bridge. Completion of overall project was expected by January 2006.

Boh Bros. Construction Co. completed the repairs of one of the twin bridges 14 days ahead of schedule. The eastbound span opened to two-way traffic on October 14, 2005 with a speed limit of 50 mph. The westbound span reopened on January 5, 2006 with the addition of temporary metal truss spans to carry one lane of traffic.13 Later the bridge accommodated two lanes of traffic with a 45 mph restricted speed limit and no shoulders. Periodic lane closures occurred regularly between 9 am and 1 pm Monday through Thursday.

Boh Bros. Construction Co., of New Orleans, the winning bidder of the bridge repair contract, undertook bridge maintenance of the repaired spans for a three year period after completion of the initial project. During the first quarter of 2006, LADOTD sought bids for a pair of replacement spans for the Interstate 10 Lake Pontchartrain crossing. Work began in June 2006 on the $733-million project, which covered construction of 30 foot high spans with three lanes and two 12-foot shoulders per bridge.14 Funding for projects was covered under the special funding package from Congress passed September 12, 2005.1

More on the bridge project found at the Twin Bridges guide.

The truss bridge over the Chef Menteur Pass in east New Orleans remained closed through November 30, 2005 due to structural damage. Repairs of the span were expected to be completed by late January of 2006. U.S. 90 otherwise was fully open to traffic from the Rigolets Bridge east to Bay St. Louis, Mississippi.

Following is a list of the 17 state-owned bridges damaged in the storm, the contractor assigned and estimated repair time, if available:

MDOT has cleared all state highways for travel except U.S. 90; however, the Highway Patrol discourages non-emergency travel in the Gulf Coast region.

The lengthy span of Interstate 10 between Gautier and Moss Point suffered severe damage during the height of Katrina. The strong winds pushed a barge into the bridge causing several of the decking components to shift. MDOT restored one lane of traffic in each direction of Interstate 10 by using the undamaged westbound span for a distance of three miles. A 31-day repair contract for the span was let on Saturday September 10, 2005 with an expected completion by early October.4 With the above stated, the $6.5-million repair project was completed in just 20 days by October 2, 2005.12

The 1.9-mile long bridge between Bay St. Louis and Pass Christian was virtually destroyed by the Hurricane Katrina storm surge. The 1.6-mile long bridge over Biloxi Bay suffered the same fate between Biloxi and Ocean Springs. Additionally, several segments of the four-lane divided highway were washed away by the rising Gulf of Mexico during the height of the storm. Bridge replacement projects were thought to take up to two years to complete.4 Otherwise U.S. 90 was closed from Bay St. Louis to Ocean Springs.9 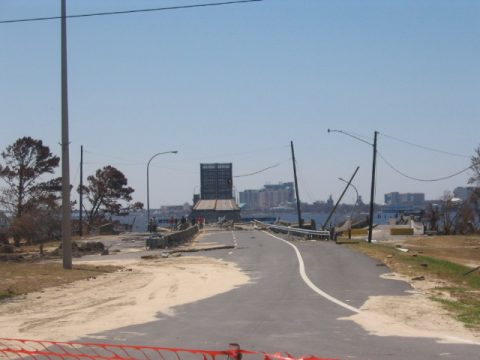 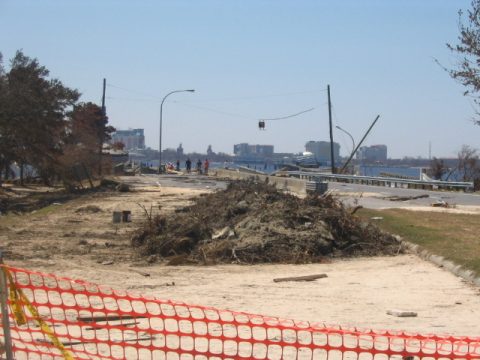 Looking east at the damaged Biloxi-Ocean Springs Bridge from the eastbound approach to the span. The only section of the span to survive was the crest and draw span. Photos taken by Robert Lee on September 11, 2005.

Adam Froehlig posted an update on the bridge to misc.transport.road on September 27, 2005:

MDOT has submitted a Request for Qualifications (RFQ) for the two main bridge projects it has along US 90 in the wake of Katrina: the Bay St. Louis and Biloxi-Ocean Springs bridges. The two bridge replacement projects will both be Design-Build projects. Both projects will build new high-rise bridges at each location (probably with 65 ft of vertical clearance) as well as partially or fully replace bridges immediately nearby. The nearby bridges in both cases carry US 90 over the parallel CSX tracks. At Ocean Springs the CSX underpass will be replaced entirely, while at Henderson Point only part of the bridge will be replaced….of note is that the Henderson Point CSX underpass was just built in 2000.

According to the RFQs, MDOT has received a Categorical Exclusion for the Bay St. Louis bridge, probably because even though it will be elevated it will remain 4 lanes. In layman’s terms, this means they won’t have to do environmental studies on the bridge replacement, and in fact the project is expected to be let in December with a target completion of June ’07.

MDOT will be performing an Environmental Assessment for the Biloxi-Ocean Springs Bridge replacement, presumably because the replacement will have more lanes than the destroyed bridge. That said, curiously this project has the same time schedule as the Bay St. Louis replacement. Perhaps they’ll be allowed to do an accelerated environmental overview given the critical nature of the project in light of Katrina and reconstruction efforts.

The RFQs are posted on MDOT’s web site at

Federal officials secured $600 million in emergency funding to rebuild both U.S. 90 Mississippi bridges in the weeks following Hurricane Katrina. The U.S. 90 St. Louis Bay bridge between Bay St. Louis and Pass Christian reopened to two lanes of traffic on May 17, 2007. The $283-million span travels up to 85 feet above the water below, removing the need for a draw span. Crews commenced work on June 16, 2006 with four lanes of traffic restored by November 18, 2007.18 The bridge later received the People’s Choice Award sponsored by the American Association of State Highway & Transportation Officials (AASHTO), AAA, and the US Chamber of Commerce.

Completion of half the Biloxi-Ocean Springs Bridge was also scheduled for November 13, 2007.15 The bridge opened to fanfare on November 1, 2007, accommodating two overall lanes, and fully by August 8, 2008.17 The $338-million project constructed a 1.6-mile bridge at 120 feet in width and 85 foot high. Full shoulders and a bike path / pedestrian walkway were included.16

Winds from Hurricane Katrina blew a 13,000-ton oil platform, the PSS Chemul, into the cable-stayed bridge over the Mobile River near the Alabama State Docks. The large platform, used to house oil rig workers out on the Gulf of Mexico, was under construction to expand and refit the vessel at the Bender Shipbuilding & Repair Co. Inc. facility on Blakeley Island when hurricane force winds pushed it from its mooring northward. The platform scraped against the bottom of the 140-foot-high bridge and remained pinned under the span for several hours.5

Fortunately after a brief closing by inspectors, it was determined that the damage done to the span was not severe enough to force closing of the bridge. The innermost lanes of the Cochrane-Africatown Bridge reopened to traffic on August 31, 2005. Repair estimates were less than $1 million,6 and all work completed by the end of 2005.11

The Bankhead Tunnel was closed during the height of the storm but reopened following Katrina’s departure. The Wallace Tunnel suffered minor flooding and remained open to at least one lane of traffic per direction in the wake of the departing storm. ALDOT crews quickly repaired travel lanes along Battleship Causeway eroded by the storm surge. All lanes were reopened by September 2, 2005. The entrance ramp from Exit 30 eastbound to eastbound Interstate 10 however was closed for a year as five concrete bridge spans associated with ramp were destroyed.7,8

While Dauphin Island suffered tremendous damage, the causeway linking the barrier island to South Mobile County reopened to two lanes of traffic on September 2, 2005.8 80% of the homes of Dauphin Island were complete destroyed or suffered major damage due to the winds and surge of Hurricane Katrina.