Evansville is Indiana’s third largest city and largest city in the southern part of the state. It is the heart of a larger metropolitan area that includes Vanderburgh, Posey, Gibson and Warrick Counties in Indiana along with Henderson and Webster Counties in Kentucky. Overall, Evansville services a larger region that includes all of Southwestern Indiana, Southeastern Illinois and parts of Western Kentucky (along with the Owensboro area) in a region generally known as the Tri-State Area. As the hub of the region, several state highways converge on the city while three interstates and U.S. 41 provide regional connections further out. 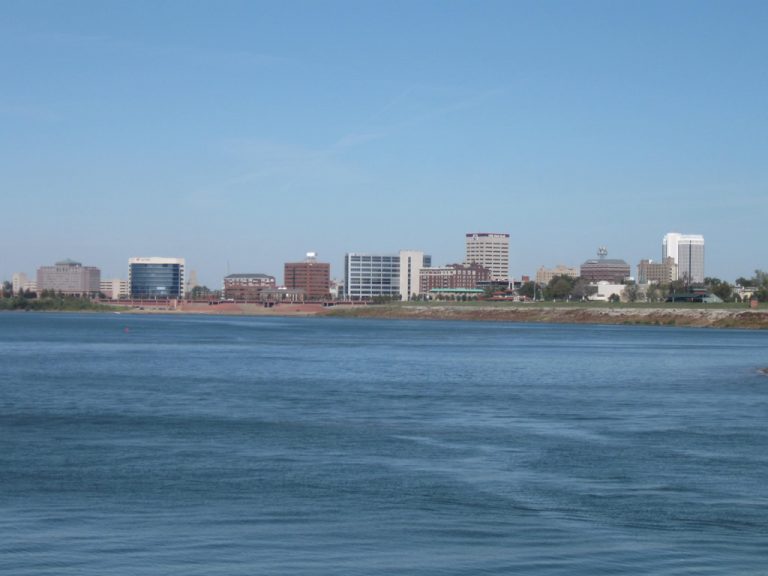 A view of the Evansville skyline along the Ohio River as viewed from Sunset Park. Photo taken by Thomas Decker (10/12/08).

Evansville was founded in 1812 on a horseshoe bend in the Ohio River and unlike Indiana’s other large cities to the north, was founded as a river city. While it grew slowly at first, it was soon joined by the Wabash and Erie Canal, which helped provide the city with a link to the Great Lakes. Railroad connections followed and Evansville began to grow similar to other Ohio River cities, benefiting as a manufacturing town with links to several types of transportation.

In the 20th Century, Evansville transitioned from a manufacturing city to more of a medical, service and retail based one as industry began to move out of the city. The city began to expand outward, especially to the east as suburbs were forming in the 1950s and beyond. Local highways were soon built to handle the added traffic generated by the city and eventually interstate connections were made with Interstates 64 and 164. However, Evansville had always suffered from a lack of connection to the state’s capital, Indianapolis. It was ultimately this goal that drove the state to begin construction on the largest road construction project in the region’s history, the construction of Interstate 69 from Evansville to Indianapolis, with half of the route between Interstate 64 and Bloomington opened on November 19, 2012. As of 2010, Evansville had 117,429 people with the larger metropolitan area having 358,676 people. To this day, Evansville continues to serve as the most urban part of Southwestern Indiana.

Interstate 64 travels for 124 miles across Southern Indiana following the route of the old U.S. 460 upon its completion in the late 1970s. The interstate was originally planned to go from Louisville along U.S. 150 through Vincennes before heading west across Illinois along U.S. 50. But political influence from Evansville, the third largest city in the state and largest at the time that was not connected via an interstate, moved the highway south to the U.S. 460 alignment.

In the Evansville area, Interstate 64 brushes across the northern edge of Vanderburgh County and serves the city via U.S. 41 and Interstate 164 (future Interstate 69). Because of this, the interstate has a marginal effect on Evansville’s development, but has helped connect the larger region to Evansville through its interchanges with the aforementioned highways. Regardless of that, INDOT still considers the interstate important enough to include it in traffic management for the Evansville region.

Interstate 69 serves the east and south sides of Evansville and is the only interstate to currently serve the city limits. The interstate is the longest in Indiana, running for (as of 2015) 272 miles in two distinct segments. The original segment goes for 157 miles from Indianapolis north to Fort Wayne and the Michigan border. The newer southern segment totals 114 miles from U.S. 41 on the south side of Evansville and runs to the northeast beyond Interstate 64 past the communities of Oakland City, Petersburg, Washington and Crane before ending at Indiana 37 outside of Bloomington. Its purpose isn’t just to link Evansville with Indy, but with Evansville to some of the other communities in the region. Despite the many complications that had prevented the project, the interstate is now a reality, and will further support the region now that the tie-in with SR 37 at Bloomington has opened. The freeway is a four-lane interstate throughout the Evansville area but serves the fastest growing area of the region, far eastern Vanderburgh County and Warrick County. Further completions to the Interstate 69 corridor will solidify this growth (chief among them a new bridge over the Ohio River and the I-69’s construction north to Indy).

U.S. 41 goes for 280 miles across the far western tier of Indiana from Northwest Indiana and south past Kentland, Attica, Rockville, Terre Haute, Vincennes, Princeton and finally Evansville. Along with Indiana 63, it serves as a four-lane expressway that connects Evansville with the Greater Chicago area. Across Vincennes, U.S. 41 is the main north-south highway that consists of a busy four to six lane expressway with numerous stoplights. Until Interstate 164 was built, it was the only major highway north out of Evansville.

Today’s U.S. 41 follows an original path that was created when the highway was expanded to expressway standards. The original U.S. 41 followed the southbound lanes of the Twin Bridges, when it was only one bridge at the time, north onto Kentucky Avenue and then onto Canal Street and Fares Avenue north out of the city. The new expressway was built to follow that route to the east in a path that cut through Evansville neighborhoods similar to the Lloyd Expressway.

Indiana 57 runs for 80 miles from the north side of Evansville, at U.S. 41 near the Evansville Regional Airport (EVV), along a path to the northeast that connects the city with Oakland City, Petersburg and Washington, before ending at Indiana 67 south of Worthington. It utilizes some of Interstates 164 and 69 in northeastern Vanderburgh County. The highway was a well-traveled two-lane highway connecting the aforementioned communities, but upon completion of the Interstate 69 freeway, its role was vastly reduced. Because of this, SR 57 may later be decommissioned.

Indiana 62 goes for 228 miles across far southern Indiana from the Wabash River near Mt. Vernon and eastward through Evansville, Boonville, Dale, Corydon, New Albany, Jeffersonville and Madison, ending at Indiana 262 in Dillsboro. In Evansville, Indiana 62 forms the western component of the Lloyd Expressway from the western boundary of Vanderburgh County to U.S. 41. After multiplexing with U.S. 41, the highway heads east along Morgan Avenue out of Evansville and on a northeastern path toward Boonville. Originally, Indiana 62 came into Evansville from the southwest via a path that followed Broadway Avenue, Barker Avenue, Franklin Avenue, Fares Avenue and finally Morgan Avenue. The route was later moved to Division Street before the Lloyd Expressway was built.

Indiana 65 is a 47.7 mile highway that begins at Indiana 66 northwest of Evansville and follows a path north into Gibson County, through Princeton and northeastward to Petersburg. Though it has less of an impact on Evansville traffic itself, it does provide another route into the city from Interstate 64 from the west and at one time was multiplexed with Indiana 66 into the city proper via Indiana 66’s original routing.

Indiana 66 runs for 152 miles from the Wabash River at New Harmony and heads southeast through Evansville, Newburgh and Tell City, finally ending in Washington County at U.S. 150. It follows the eastern component of the Lloyd Expressway, connecting the Evansville city center with the growing commercial districts around Green River and Burkhart Roads and further out into the Warrick County suburbs around Newburgh. At the interchange with the Lloyd Expressway and U.S. 41, Indiana 66 heads north to the Diamond Avenue Expressway and follows that divided highway across Evansville’s north side and out to the northwest toward New Harmony. Originally, the highway followed New Harmony Road from the northwest and then down to Franklin Avenue and east across Evansville to Kentucky Avenue and then onto Lincoln Avenue, finally reach Newburgh Road and heading east along the current path of Indiana 662.

Indiana 662 is a short 1.5-mile highway that goes from Interstate 164 east to Ellerbusch Road at the Newburgh town limits. Originally, the highway was longer, stretching from U.S. 41 (Kentucky Avenue) along Lincoln Avenue eastward past Interstate 164 and along the current path into Newburgh and following French Island Trail to the current Indiana 66 expressway east of town. Today’s Indiana 662 is only a shadow of its former self.

Interstate 164 was the 20-mile spur interstate that connected Interstate 64 with the city of Evansville on the Ohio River. On November 15, 2013 it was announced by INDOT that the highway would be replaced by Interstate 69 for it entire route. By late 2014 signs had been replaced to officially eliminate Interstate 164.

The interstate traveled along the current routing of Interstate 69 east from the Veterans Memorial Parkway (which linked Interstate 164 with Downtown Evansville) and follows the southern edge of the city for a few miles before turning to the north and passing through the far eastern suburbs of Evansville. North of Lynch Road, the interstate enters the rural fields of Vanderburgh County and finally meets up with Interstate 64 in the county’s far northeastern corner. North of there the highway became Interstate 69, continuing north across Gibson, Pike, Daviess and Greene Counties en route to Bloomington.

The historic route of U.S. 41 Business looped west from U.S. 41 (Kentucky Avenue) along Riverside Drive to Sycamore Street through the Evansville centra business district. The route followed Main Street north to either Division Street east or an overlap with U.S. 460 and Indiana 62-66 along Virginia and Franklin Streets.

U.S. 460 served the Evansville area as the primary route linking the city with St. Louis, Missouri to the west and Louisville, Kentucky to the east before the completion of Interstate 64. Decommissioned by 1977, likely due to its replacement by the parallel freeway, the route overlapped with Indiana 66 southward from Diamond Avenue along St. Joseph Avenue to Franklin Street east. A one-way couplet of Virginia and Franklin Streets carried both routes and Indiana 62 between 1st Avenue and Garvin Street, with the two directions utilizing Virginia Avenue alone east to Fares Avenue (historic U.S. 41). A short overlap with U.S. 41 along Fares took U.S. 460 northward with Indiana 62 to Morgan Avenue, with both routes traveling east along Morgan out from the city.

Some 1960s highway maps alluded to an extension of U.S. 641 north from Henderson, Kentucky into Evansville, perhaps to the intersection of Fares Avenue (historic U.S. 41) and U.S. 460 (Virginia Street). USGS Quadrangle maps also show the cosigning of U.S. 41 & 641 northward from Kentucky. However with that stated and according to research at USEnds.com, U.S. 641 never officially entered the Hoosier State.

This highway went east from U.S. 41 (Kentucky Avenue) to Indiana 62 along the path of Washington Avenue. The highway existed in the 1950s and 1960s.

Originally conceived in the 1979 Evansville Urban Transportation Study, University Parkway was planned to connect the Lloyd Expressway to Interstate 64 to provide a western bypass for Evansville. Initial work focusd on the interchange with the Lloyd Expressway, which was completed at a cost of $3.6-million in 1994. The second phase, costing $12.36-million, extended the parkway northward to Upper Mount Vernon Road in 2006. A $6.1-million third phase brought the four-lane highway north to Marx Road in April 2011. The final section of the current parkway, from Marx Road to Diamond Avenue, was opened in early May 2012 at a cost of $8.73-million. So far there are no plans on extending the parkway beyond Indiana 66 (Diamond Avenue Expressway). The nine-mile connection to Interstate 64 would cost $50-million (2012 dollars).1