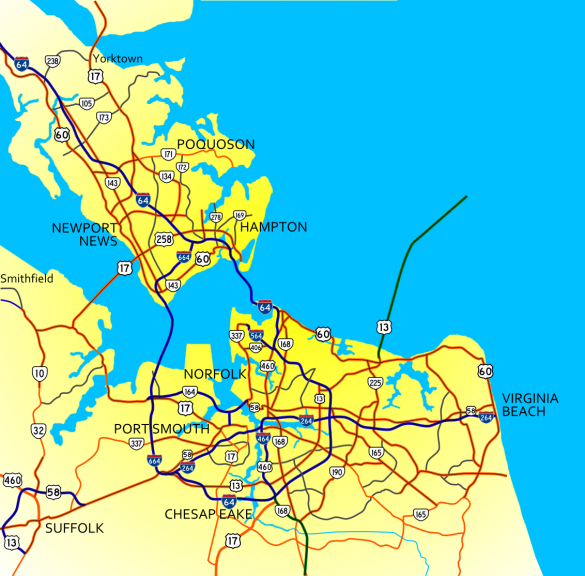 Hampton Roads consists of the cities Chesapeake, Hampton, Newport News, Norfolk, Portsmouth, Suffolk and Virginia Beach. The region is a military hub with several facilities including Norfolk Navy Base, Oceania Naval Air Station, Little Creek Naval Amphibious Base and Langley A.F.B. In addition southeast Virginia is home to a large shipbuilding industry with yards all along the branches of the Elizabeth River in both Norfolk and Portsmouth. The metropolitan area sees commercial districts in Downtown Norfolk and suburban Chesapeake and Virginia Beach. Older neighborhood areas can be found around Downtown Newport News, Hampton, Norfolk and Portsmouth. Suburban tracts spread throughout southern and eastern Virginia Beach, Chesapeake and Suffolk.

The main freeway through Hampton Roads is Interstate 64. The route links southeastern Virginia with the state capital of Richmond and points west. Connections with Interstates 95 and 295 link Hampton Roads with Northern Virginia and Washington D.C. I-64 carries between four and eight lanes from Williamsburg to the eastern terminus in Chesapeake. Widening expanded the Hampton segment west of Interstate 664 to eight lanes from U.S. 258 (Mercury Boulevard) to Virginia 143 (Jefferson Avenue), including an HOV-lane during peak hours. At the James River, Interstate 64 crosses the Hampton Roads Bridge Tunnel. Completed in 1957 as a two lane facility, the crossing carries Interstate 64 and U.S. 60 between Phoebus in Hampton and Willoughby Spit in Norfolk. Construction upgraded the crossing with a twin two lane bridge by 1976. Completion coincided with the removal of tolls.

Southeast through Norfolk, I-64 expands to include a reversible High Occupancy Vehicle (HOV) roadway between Interstates 564 and 264 at Virginia Beach. South of Interstate 264, the beltway carries six general travel lanes, plus two HOV-2 lanes through to the interchange with Battlefield Boulevard (Virginia 168 Business). Construction underway in 2009 rebuilt the exchange at Battlefield Boulevard and expanded I-64 to include a local/express configuration. West from I-464, the freeway reduces to four overall lanes through to the terminus of I-64 at Interstates 264 and 464. Along this segment is the High Rise Bridge across the Elizabeth River between Interstate 464 & U.S. 17 and U.S. 17 Business. The concrete and steel drawbridge was built in 1969.4

Of the four branch routes from Interstate 64, I-264 is the longest with 25.07 miles. The east-west freeway runs across the city of Portsmouth to Downtown Norfolk and out to the Virginia Beach Oceanfront. Within Norfolk, Interstate 264 constitutes an eight-lane freeway between the Waterside Drive exit near Downtown and U.S. 13 (Military Highway). The inside lanes operate as HOV-2 lanes during the peak hours. I-264 crosses the Elizabeth River South Branch through the Downtown Tunnel and over the Elizabeth River East Branch along the Berkeley Bridge. The Downtown Tunnel system includes the oldest tunnel within Hampton Roads, having opened in 1952. A second bore was added by 1987. The Berkely Bridge opened in 1952 and was expanded in 1991 to coincide with completion of the second Downtown Tunnel.4

Prior to 1999, I-264 ended at Interstate 64 opposite the Virginia-Beach Expressway (Virginia 44). With tolls dropped along the Virginia-Beach Expressway in 1995, Virginia 44 became eligible for inclusion in the Interstate Highway System. Through Virginia Beach, Interstate 264 is generally an eight-lane freeway. During the morning peak hours, the inside lane of I-264 west from Rosemont Road (Exit 18) switches to HOV-2 traffic while the outside shoulder is utilized as a travel lane to maintain eight general purpose lanes. The traffic pattern is repeated along eastbound during the afternoon and evening peak hours.1

Interstate 464 is a north-south freeway between the Hampton Roads Beltway, U.S. 17 and Virginia 168 (Oak Ridge Connector) and I-264 at the Berkeley Bridge by Downtown Norfolk. The freeway carries six lanes northward from I-64 to Virginia 337 (Exit 4). Original planning documents referred to Interstate 464 as Interstate 364.2

Interstate 564 is a six-lane freeway spurring west from Interstate 64 and U.S. 460 (Granby Street) to Virginia 337 (Admiral Taussig Boulevard) at Norfolk Naval Base. Studies are currently underway for the construction of a third bridge-tunnel crossing in the Hampton Roads area that would extend Interstate 564 westward to I- 664 off the coast of Newport News. This includes a potential widening of I-664 northward into the city. VDOT planning documents reference the project as Virginia 510.3

Interstate 664 crosses the James River on the Monitor-Merrimac Memorial Bridge Tunnel. Opened in 1992, the bridge-tunnel system accommodates four lanes of traffic through a pair of 4,500-foot tunnels.4 I-664 bypasses Downtown Norfolk and Portsmouth to the west, providing the VDOT signed route from Richmond and northern Virginia to Nags Head and the North Carolina Outer Banks. The freeway carries four lanes northward from Suffolk to Newport News. The northernmost reaches of the freeway, also the oldest, are six lanes wide.

First signed in 1997,3 the Hampton Roads Beltway was designated in an effort to ease motorist confusion on Interstate 64 in southern Hampton Roads. The beltway overlays all of Interstate 664 and I-64 from Exit 264 to Suffolk. Trailblazers for the beltway are generally paired with confirming markers along the respective mainline Interstates.

The beltway was designated mainly to aid drivers along Interstate 64 south of I-264 and the Virginia Beach-Norfolk Expressway. With I-64 forming a loop south and then west from Virginia Beach through Chesapeake, cardinal directions posted along the freeway were misleading, with eastbound signs posted when the the lanes were traveling west and vice versa. By 2000, VDOT (Virginia Department of Transportation) removed cardinal direction designations from all Interstate 64 related signs southward from the eastern I-264 interchange at Exit 284. Coinciding with this sign change was the addition of Hampton Roads Beltway (HRB) shields with inner or outer banners.

Prior to completion of the Oak Ridge Connector, and the subsequent Chesapeake Expressway, Battlefield Boulevard (Virginia 168) provided the main route between Hampton Roads and the Outer Banks of North Carolina. The state route traveled along an at-grade arterial through Great Bridge, and a two-lane road southward to the North Carolina state line. With the Outer Banks growing as a popular tourist destination, along with a population boon in Chesapeake, congestion along Virginia 168 grew.

The city of Chesapeake pushed for an expanded Virginia 168 along a new alignment to alleviate the growing congestion. A four-lane corridor along or near Virginia 168 through Chesapeake, including the “Great Bridge Bypass” and “Oak Grove Connector” had been considered since the mid-1960s. It was proposed at that time as an at-grade expressway rather than a freeway.1

With the Oak Ridge Connector completed, work ensued on the tolled Chesapeake Expressway alignment south of Great Bridge. The project began at the state line, with construction of a four-lane boulevard north to Galbush Road. The toll road separates from the old alignment (Virginia 168 Business) at Galbush Road. The main line toll plaza lies north of Galbush Road and ahead of the first interchange with Battlefield Boulevard (Exit 5).

Excessive rains from Hurricane Floyd and various winter storms hampered efforts, but crews were able to open the 6.4 mile long toll road on time before Memorial Day weekend of 2001.4 The Chesapeake Expressway is four lanes wide with a 55 mile per hour speed limit.

Virginia 164 links Interstate 664 and the Hampton Roads Beltway with the Elizabeth River Tunnel connecting Portsmouth to Downtown Norfolk, and the Martin Luther King Freeway south to I-264. The Western Freeway provides an alternative to Interstate 264 while also serving freight traffic to Portsmouth Marine Terminal.

SR 164 was never planned as Interstate 164. The numbering is just coincidental, as SR 164 falls in line with the Virginia route numbering convention (clustering). SR 165, 166, 168 and 170 are also posted within Hampton Roads.

Historically, SR 164 was assigned along Laskin Road through Virginia Beach in the 1950s.

Within the Hampton Roads Beltway U.S. 13 follows Military Highway, a commercial arterial arcing south to I-464 in Chesapeake. Military Highway expands to eight overall lanes between U.S. 58 (Virginia Beach Boulevard) and Indian River Road. U.S. 460 combines with U.S. 13 west from Bainbridge Boulevard across the Elizabeth River to Bowers Hill, where the pair merge with U.S. 58 west through Suffolk.

Dominion Boulevard angles northeast initially as an at-grade highway. Construction completed in 2017 upgraded U.S. 17 across the Elizabeth River with a pair of high rise toll bridges, and the remainder northeast to SR 168 (Oak Ridge Connector) as a limited access highway. U.S. 17 ties into I-64 and I-664 at the north end of SR 168. The route doubles back to George Washington Highway west along side Interstate 64 between Exits 291 and Exit 296.

U.S. 60 travels the city streets of Newport News and Hampton via Warwick Boulevard, 25th & 26th Streets, and Kecoughton Road before merging with Interstate 64 to cross the James River on the Hampton Roads Bridge-Tunnel. U.S. 60 separates from I-64 at 4th View Street, just east of the Willoughby Spit. U.S. 60 straddles the southern shore of the Chesapeake Bay along Ocean View Avenue and Shore Drive in northern Norfolk and Virginia Beach.

Shore Drive turns southward at Fort Story, taking U.S. 60 to Atlantic Avenue along the Virginia Beach Oceanfront. Midway along the Oceanfront, Atlantic Avenue shifts one block east from U.S. 60 with Pacific Avenue continued the US highway south to its end at the Rudee Inlet Bridge to General Booth Boulevard.