Appleton originated from a fur trading post that was built in the early 1800s along the Fox River by Hippolyte Grignon. The Fox River is part of the Fox-Wisconsin Waterway, which was an important waterway that connected the Mississippi River with the Great Lakes at the time.

Methodist minister Rev. Reeder Smith wanted to establish a college in the area and obtained funding from Amos Lawrence, a Boston philanthropist that donated money to many colleges and causes at the time. Lawrence University was built, and the settlement of Appleton was formed, which was named after Lawrence’s wife’s family.

Paper mills soon followed due to the timber and proximity to the Fox River, and the world’s first commercial hydroelectric power plant became operational in 1882. The Vulcan Street Power Plant provided power for the first Edison light bulbs outside of the eastern United States. It also powered the first electric street car in the United States that ran until 1930, when buses replaced the street cars.

U.S. 41 developed into the busiest highway in the Fox Valley and received many upgrades. A freeway along the north side of Appleton was built in 1962 and was extended southward through Neenah soon after. In 1975, a bridge over Little Lake Butte Des Mortes provided a major connection for the southern Fox Cities, and became a part of WIS 441/Tri County Expressway. The freeway was finished in 1993 and completed a beltway around Appleton, along with providing the south and east side of Appleton freeway access while fueling growth. 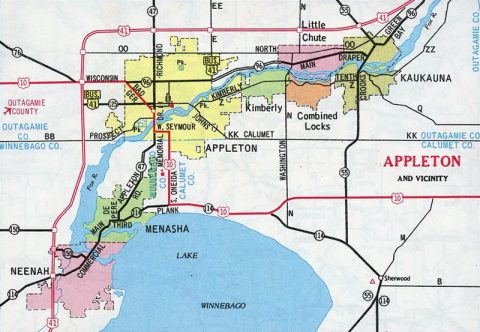 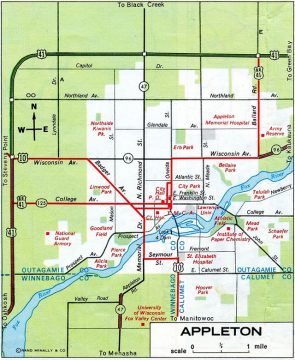 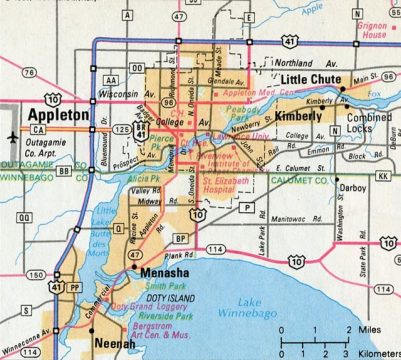 I-41 is the major north south freeway that enters from the south in Neenah and curves east along the north side of Appleton, Little Chute and Kaukauna. Past Kaukauna, it turns northeast towards Green Bay. The freeway bypass of Appleton in 1962 was one of the first freeways completed in Wisconsin. U.S. 41 was largely expressway outside of urban areas between Green Bay and Milwaukee, but was finished as a freeway in 2000. In 2005, legislation was completed to make U.S. 41 an interstate, and the plan was finished in 2015 with the installation of I-41 signs.

US 10 was originally a two lane roadway that traveled through Appleton. In the 1990s, major upgrades took place along the route. The first was a new four lane roadway along the concurrent route with Wis 114 and a reroute along Wis 441 and US 41 bypassing Central Appleton. A new freeway was then extended from the end of Wis 441 towards Stevens Point, which provides a western freeway/expressway connection to Appleton.

Wis 15 is the newest state highway to serve the Fox Cities. It was built as a bypass for the Fox River Mall area for the Greenville and Hortonville areas to replace Wis 76. The road replaced US 45 between Greenville and New London in 2003. The remaining two lane portion is scheduled to be expanded to four lanes with a Hortonville Bypass in 2018.

Wis 47 enters from the north and passes through the center of Appleton. It is mostly four lanes and is the primary Downtown Appleton exit along I-41 south. The route ends at Wis 114 in Menasha.

Wis 55 is the main north south highway through Kaukauna and Sherwood. The section between I-41 and Wis 96 is set to be expanded and reconstructed in 2018. It is four lane undivided through Kaukauna and reduces to two lanes south of the city. It then joins Wis 114 through Sherwood and runs along the east shores of Lake Winnebago.

Wis 96 is a mostly urban route that passes through Kaukauna, Little Chute and Appleton. The road is mostly two lanes until it enters Appleton, where it is four lanes. The route was extended along the Wisconsin Avenue portion of former US 10 and passes by the Fox River Mall, the largest shopping center in Wisconsin. The area near I-41 is the busiest commercial area in the Fox Cities.

Wis 114 travels through the southern Fox Cities. It begins at I-41 in Neenah and is the main Neenah exit along I-41. It travels through Downtown Neenah and Menasha, and joins US 10 as a four lane roadway east of Menasha. It departs US 10 towards Sherwood and is undergoing a study for possible expansion due to growth in the area.

Wis 125 is a short four lane route that connects I-41 with Downtown Appleton. It is a very busy roadway that travels along a busy commercial corridor and is the main Downtown Appleton entrance from the Appleton Airport and I-41.

County E follows Ballard Road from County OO until it turns northeast to Freedom. The route has experienced a lot of new commercial and residential growth. The Thrivent Financial’s large headquarters is located along the route and a lot of vacant land surrounds the headquarters.

County N is the main north south roadway through the eastern Fox Cities. It begins at Wis 114 and expands to a four lane undivided roadway at US 10. It then switches between two and four lanes between County KK and Wis 96. It provides the only Fox River connection between Wis 441 and Kaukauna. It runs briefly along County OO until it turns north again and provides the only Little Chute interchange on I-41.

County AP is a mostly four lane undivided roadway that starts by curves of Wis 441/US 10 and parallels the south leg of Wis 441. It was rerouted on an extension of Midway Road to provide another east west roadway as an alternative to County KK, which is becoming increasingly congested.

County CA is an brief expressway that connects Appleton International Airport (ATW) with I-41. It begins at the airport and runs past the southern Fox River Mall area and ends at I-41. It is four lane divided with access only at intersections for its entire length.

County CB runs along the west side of I-41. It begins in Greenville and runs past the Appleton airport. It then enters Winnebago County into the new Village of Fox Crossing and is the main north south arterial through the community. It serves a growing commercial area at an interchange with US 10 and continues south to its end at County JJ in Neenah.

County KK runs along the Outagamie/Calumet County Line for almost its entire length. It serves the growing area of Harrison and Darboy. The interchange with Wis 441 has become the busiest interchange along the freeway with major commercial development.

County OO follows the original US 41 bypass of Appleton that was built in 1938. It begins at I-41 and travels east along the north side of Appleton, Little Chute and Kaukauna. It is mostly four lanes except between Wis 55 and County J, where it is three lanes past an industrial area of Kaukauna.

College Avenue is the main roadway through Appleton. It is a part of County CA and Wis 125 on the west side and County CE on the east side. Through the city, it is an Appleton city street but the busiest in the city. It passes by the Performing Arts Center and the main buildings in Downtown. It also passes through Lawrence University, which gave the street name College Avenue. There are traffic signals at every intersection between Wis 47 and Meade Street. It crosses over the Fox River on a recently reconstructed bridge and runs through a residential area until it approaches Wis 441, where it becomes a part of County CE.