State Road 399 previously connected U.S. 98 at Gulf Breeze with Pensacola Beach and Via De Luna Drive east to Gulf Islands National Seashore and Navarre. A jurisdictional shift from state to county maintenance occurred with the Bob Sikes Bridge across Santa Rosa Sound and portions of Pensacola Beach Boulevard, the connecting roadway, in 1999. This left just 0.319 miles of SR 399 in the system, which entails the trumpet interchange with U.S. 98 and the immediate approach to the toll bridge. The toll bridge is one of two crossings from the mainland to Santa Rosa Island. 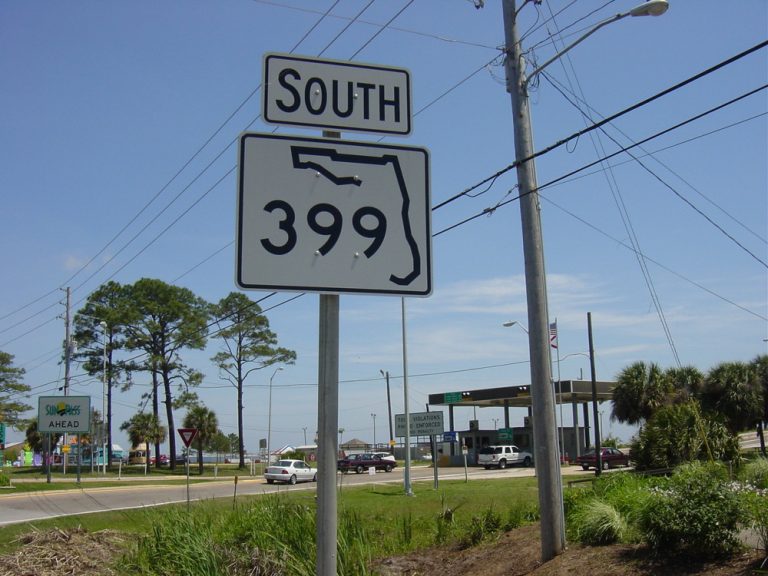 Historical look at the southbound beginning of SR 399 at the foot of the Navarre Beach Causeway. Drivers crossing Santa Rosa Sound first entered a small toll plaza, where tolls were charged at a rate of $1.00 per passenger vehicle, before they spanned the Intracoastal Waterway. Photo taken by Jeff Royston (04/21/02).

County Road 399 turns northward at the entrance to Navarre Beach County Park for the causeway and bridge across Santa Rosa Sound. This two-lane roadway opened in 1960 and includes two bridges: a high rise span over the Intracoastal Waterway, and a low level bridge over a relief channel. Tolls ($1.00 per passenger vehicle) were charged for the crossing until July 1, 2004 when Santa Rosa County took over control of the bridge from the state. Santa Rosa 399 ends at U.S. 98 in Navarre.

State Road 399 was downgraded from Navarre to Gulf Islands National Seashore after the maintenance handover from the state to Santa Rosa County in 2004. Signage for the state road remained until 2006; county road signage did not appear until April of 2011 after an inquiry was made by AARoads to the County regarding the road's status.