State Road 682 comprises a 3.72-mile route from SR 699 (Gulf Boulevard) at St. Pete Beach to an interchange with Interstate 275 and U.S. 19 at 34th Street South in south St. Petersburg. The route follows the tolled Pinellas Bayway, a causeway and series of bridges linking the barrier island with Isla Del Sol, Bayway Isles and the Eckerd College area. Tolls are levied in the westbound direction ahead of the Boca Ciega Bay Channel bridge and eastbound ahead of the Intracoastal Waterway bridge.

SR 682 (Pinellas Bayway) originally reduced to two lanes across the Intracoastal Waterway along a draw bridge. The 1962-built span was replaced with a fixed high-level bridge as part of a $41-million project starting in 2011.1 The new span opened initially for eastbound traffic in March 2013, with westbound shifting over by mid-April 2013. Demolition of the old bridge commenced afterwards, followed by work on the second half of the crossing.2 Opened on October 17, 2014, the new Pinellas Bayway carries four overall lanes with full outside shoulders and a pedestrian/bicycle walkway along the eastbound side.1

The Pinellas Bayway was originally designated as part of SR A19A, a loop west from U.S. 19 between south St. Petersburg and Largo. SR A1A used all of the Bayway, Gulf Boulevard (SR 699) north from Pass-a-Grille Beach to St. Pete Beach, Corey Causeway and Pasadena Avenue (SR 693) to South Pasadena, and 66th Street (SR 693) north through west St. Petersburg, Pinellas Park and U.S. 19 north of Ulmerton Road (SR 688). The designation was retired by the late 1970s. 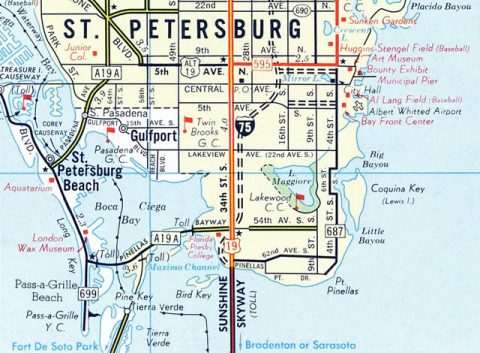 This 1971 map excerpt shows the Pinellas Bayway as part of the southern leg of SR A19A, a loop joining St. Petersburg with St. Pete Beach and South Pasadena to the west.