Interstate 370 is a 2.54-mile long spur from I-270 into the city of Gaithersburg. The route links the Inter County Connector (ICC) and Shady Grove Metro station with Interstate 270 and Rockville.

Opening of Maryland Route 200 (ICC) on February 23, 2011, from near the Shady Grove Metro station east to MD 97, resulted in a reconfiguration of the Interstate 370 southward curve toward Shady Grove Road. Built where the freeway turned south is a trumpet interchange joining I-370 with the west end of the ICC. This shortened I-370, which was previously 3.13 miles in length. Old I-370 leading south to the metro station was redesignated as part of 0.52-mile unsigned Maryland Route 200A, though an end shield remained along the route in June 2012. 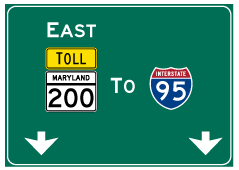