Encircling the city of Amarillo for 39.97 miles, State Loop 335 varies as a surface arterial with two or four lanes. Several interchanges line the route as it travels around both the rural and suburban periphery of the city.

The need for a belt route around Amarillo was first identified in 1953, as plans for the Interstate Highway System started to take shape. A highway development plan followed in 1959, and the first segment of State Loop 335 was under construction in 1965. Ensuing delays due to playa lakes and wildlife concerns delayed construction from 1968 to 1980. Completion of SL 335 took place in July 19991

A long range plan to upgrade the entire Loop 335 corridor into a freeway gained momentum in 2014 with progress on a $30 million project to upgrade the southwest quadrant of the loop, from IH 27 west to Soncy Road. The proposal includes replacing the diamond interchange with IH 27 into a three level exchange with a new frontage road system added to SL 335.2

Further north on the west side of Amarillo, a full stack interchange is proposed for SL 335 and IH 40. SL 335 will take a new alignment west over FM 2186 from Soncy Road and north over Helium Road to IH 40 near the west end of Business Loop I-40.

TxDOT indicated in 2016 that funding woes may curtail the full build out of SL 335 to freeway standards. Instead, only portions considered high priority might be addressed. Amarillo Mayor Paul Harpole indicated that the anticipated time table of 10 to 11 years for the conversion may ultimately end up taking upwards of 30 years. Estimates at the time were nearly $1 billion for the full build out of the Amarillo Loop.1

The City of Amarillo received $65 million in funds from TxDOT in March 2017 to advance the Amarillo Loop project. The addition brings the total to $150 of the $870 million needed to upgrade the corridor.3 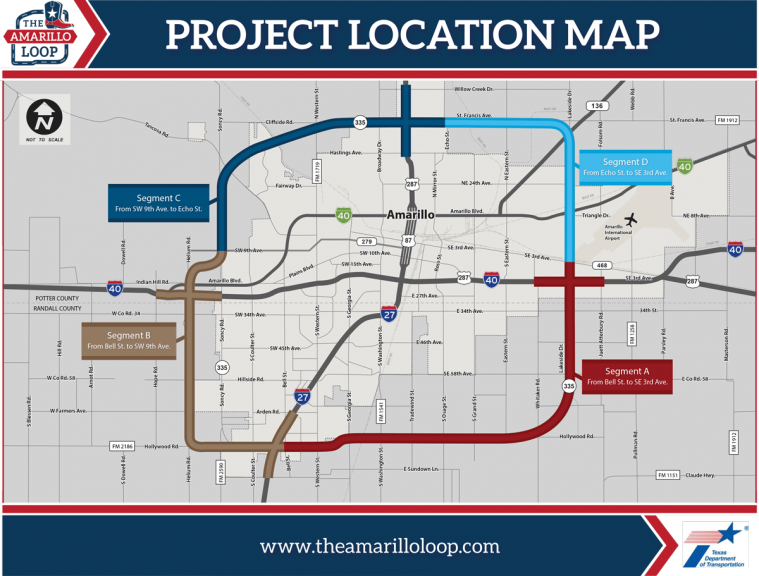 Construction underway in 20162 involved Segment A of the Amarillo Loop project. This converts the two-lane section of SL 335 from Bell Street east to FM 1541 to a four lane highway with frontage roads. Segment A also includes expansion of SL 335 east from FM 1541 to IH 40 and 3rd Avenue on the east side of the city. That work was in the planning stage in 2016.