U.S. 19, a major highway connecting Bradenton, Florida, with Erie, Pennsylvania, passes through the heart of Georgia. It overlays all of Georgia 3 south of Atlanta, and a combination of Georgia 400, 9 and 11 north of Atlanta. Georgia 300 (Florida-Georgia Parkway) also accompanies the highway from the Sunshine State north to Albany.

U.S. 19 enters the Peach State 12 miles south of Thomasville. The US highway travels around the east side of the Thomas County seat, overlapping with U.S. 84 for 2.8 miles north from Smith Street (U.S. 84 Business) to the Thomasville Bypass taking U.S. 84 west toward Bainbridge. Actions approved by AASHTO on June 26, 1985 relocated U.S. 84 was relocated around Thomasville, established U.S. 84 Business through the city and eliminated U.S. 19 Business.

Traveling north from Thomasville, U.S. 19 follows a four lane highway to Ochlocknee, Pelham, Camilia and Baconton. Bypassing Albany to the east, U.S. 19 splits with SR 300 north to Cordele and overlaps with U.S. 82 west from Sylvester along the Liberty Expressway. The limited access bypass of Albany was originally designated as SR 333. It became a part of U.S. 19 in 1977, with the former route to Downtown recognized as U.S. 19 Business. AASHTO granted permission to the state for the route changes on July 6, 1977.

Beyond Albany, U.S. 19 heads to Leesburg and a controlled access bypass around the west side of the city. The route serves Smithville, Americus, Ellaville, Butler, Thomaston and Zebulon before combining with U.S. 41 north from Griffin into the Atlanta metropolitan area. Following completion of the freeway bypass to the west of Griffin, and as approved by AASHTO on June 23, 1969, the former routes of U.S. 19 and 41 to Downtown were redesignated as U.S. 19 Business and U.S. 41 Business respectively. 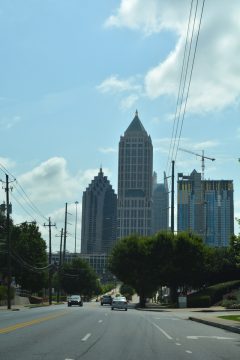 The North Fulton Expressway (U.S. 19 & Georgia 400) extends from the Atlanta area north to Coal Mountain as a full freeway. U.S. 19 continues from there along an at-grade expressway to Georgia 60 and 115 (Long Branch Road). Georgia 9 follows the pre-freeway route of U.S. 19 through Roswell and Alpharetta to the west. The realignment of U.S. 19 onto I-285 east from Roswell Road and the North Fulton Expressway was approved by AASHTO on November 14, 1980.

U.S. 19 and Georgia 9 north reduce to two lanes as they wind northward from the expressway end at Georgia 60 to Dahlonega. The US highway bypasses the east side of the city, with U.S. 19 Business overlaying the old route to the University of North Georgia and Downtown. The relocation of U.S. 19 around Dahlonega and establishment of U.S. 19 Business were approved by AASHTO on June 4, 1990.

Continuing north, U.S. 19 passes near the highest point in Georgia (Brasstown Bald, elevation 4,784 feet). U.S. 129 combines with the northernmost 31.7 miles to Blairsville and the North Carolina state line near Ivylog. The two routes, and U.S. 76 were relocated onto a new at-grade bypass of Blairsville per AASHTO on November 14, 1980.