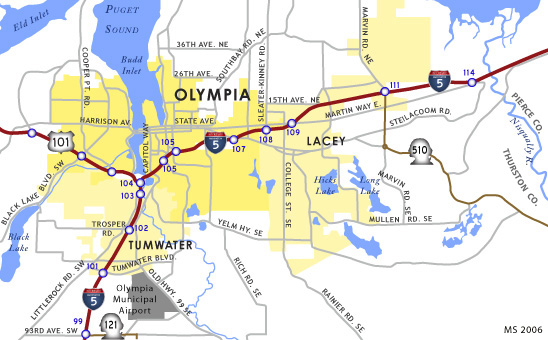 The origins of Interstate 5 through Olympia start with the 1950s expressway of U.S. 99 south from Exit 102 (Trosper Road) at Tumwater. U.S. 99 utilized this road and followed Trosper Road east to Capitol Boulevard until 1958. A new stretch of Interstate 5 freeway opened then between Exits 102 and 109, doubling as the route for U.S. 99. Further east, Interstate 5 was completed in 1968 from Exits 109 to Exit 114. U.S. 99 was dropped from Washington a year later.1

U.S. 101 travels 365.55 miles within the Evergreen State. The route hugs the Pacific Coast from the Columbia River north of Astoria, Oregon to a point north of Lakaloch west of the Olympic Mountains. The US route encircles the Olympic Peninsula east and south to Shelton and its terminus at Olympia. The original “northern” terminus of U.S. 101 was located in downtown at the intersection of 4th Street and Capitol Way, where U.S. 99 turned east from the Capitol area to Lacey. After 1949, Olympia converted 4th Street and parallel State Avenue into a one-way street couplet, shifting the beginning of U.S. 101 one block further north.2 U.S. 101 shifted a freeway bypass south of Olympia in 1959.

The route shared surface, and later freeway, alignments with U.S. 99 east of downtown Olympia to Tacoma and west from downtown to Mud Lake with U.S. 101. When U.S. 99 shifted to the Interstate 5 freeway in 1958, U.S. 410 was realigned from 4th Street and Pacific Avenue to a shared path with the new U.S. 101 freeway and Interstate 5 at Exit 104.1