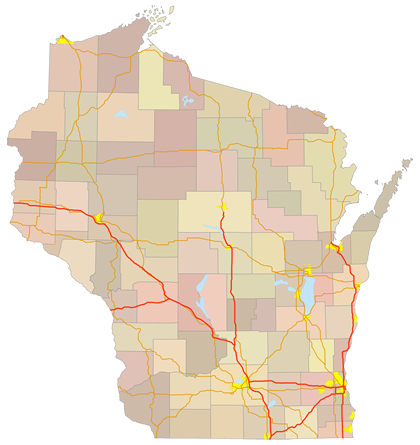 About the Wisconsin Trunk Highway System

Wisconsin also has a unique lettered county road system. Started in the 1920s, counties laid out a lettering system for their maintained roads. Eventually adopted by the state, the letter designations can be 1,2, or 3 characters long. Lettered routes can be used multiple times throughout the state.

County trunk highways can be lettered just to give a road a designation, or they can can have meaning. For example, County HS in Brown County was named because it passes through Howard and Suamico.

During the late 1980s, Wisconsin adopted a 2020 Highway Plan. This laid the groundwork for Wisconsin’s present transportation system with a goal of improving routes within the plan by 2020. Consisting of a 1550 mile system of freeways and expressways, the plan outlined linking major population and economic centers. A 2100 mile subsystem of high quality two lane and four lane roadways that connect key communities throughout the state compliment the backbone system. The final backbone route upgraded within the plan was U.S. 41 between Oconto and Marinette in 2009.

The Connections 2030 plan is a revised version of the original 2020 plan. It was enacted in 2009 to provide updates and revisions based upon Wisconsin’s Transportation needs.