With six overall lanes and few exits, I-475 is the preferred route around the Macon area for long distance travelers between the Midwest and Florida. Plans for the 15.92 mile long bypass emerged as the alignment for Interstate 75 between Forsyth and Perry shifted to incorporate a route through Macon. The freeway opened to traffic in 1967, four years before I-75 through Macon was completed.1,2

Interstate 475 was widened from four to six lanes from Fall 1998 to early 2002 at cost of $46 million.3 Construction commencing in 2006 upgraded the wye interchange at the south end of I-475 in conjunction with the addition of distributor roadways linking both freeways with adjacent Hartley Bridge Road (Exit 155). The new northbound ramp to I-475 opened on July 9, 2009.4

The Interstate 475 designation was originally slated for metropolitan Atlanta along an alignment running north from I-75 at Stockbridge to I-285 at Sandy Springs. The southern and northern segments of this route eventually constructed as Interstate 675 and Georgia State Route 400 respectively. The central segment, which later was rescinded into a loop from Downtown to Buckhead as I-485, was never built due to community opposition. 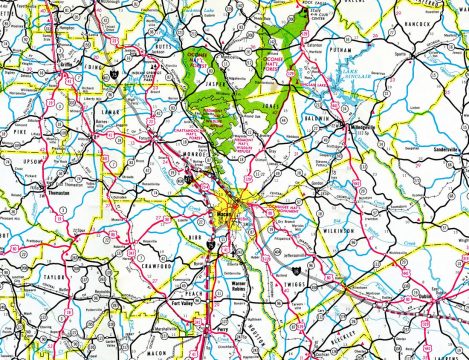 Interstate 475 was under construction simultaneously with Interstate 75 leading south from Bibb County to Georgia 49 at Byron in 1964.