Measuring 6.68 miles in length, Interstate 516 overlays both W.F. Lynes Parkway and Georgia State Route 21 from Savannah northwest to Garden City. The four to six lane freeway encircles western reaches of the city between Hunter Army Airfield and the Port of Savannah - Ocean Terminal.

Originally designated as Georgia Route 26 Loop, Lynes Parkway was redesignated as an extension of SR 21 in 1979 and added to the Interstate system in 1985. U.S. 17 and U.S. 80 were both realigned to share segments with I-516/SR 21 at that time: U.S. 17 followed the freeway north from Ogeechee Road to Main Street through Garden City. It was realigned again in 1988 away from Garden City and onto I-16 to the Talmadge Bridge. U.S. 80 joined I-516 from Bay Street and Augusta Avenue southward to Ogeechee Road east.

DeRenne Avenue was extended west from Montgomery Street to ACL Boulevard by 1967, with construction of W.F. Lynes Parkway north to Interstate 16 complete by 1968. Work on the freeway progressed from I-16 north to Augusta Avenue by 1970. The interchange with Bay Street and curved alignment northwest into Garden City was added next by 1979, followed by the four lane section west to Burnsed Boulevard (Exit 8) in 1983.1 Georgia State Route 421 was assigned to Interstate 516 as a reference number in 2000 (All Georgia Interstates have a 400-series counterpart). 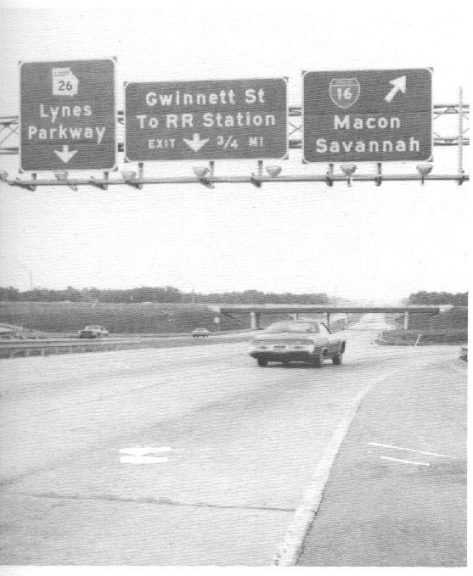 Lynes Parkway northbound at Interstate 16 when it was designated as Georgia Route 26 Loop. Photo scanned from the 1971 Groves High School yearbook, courtesy of Russell Wells.