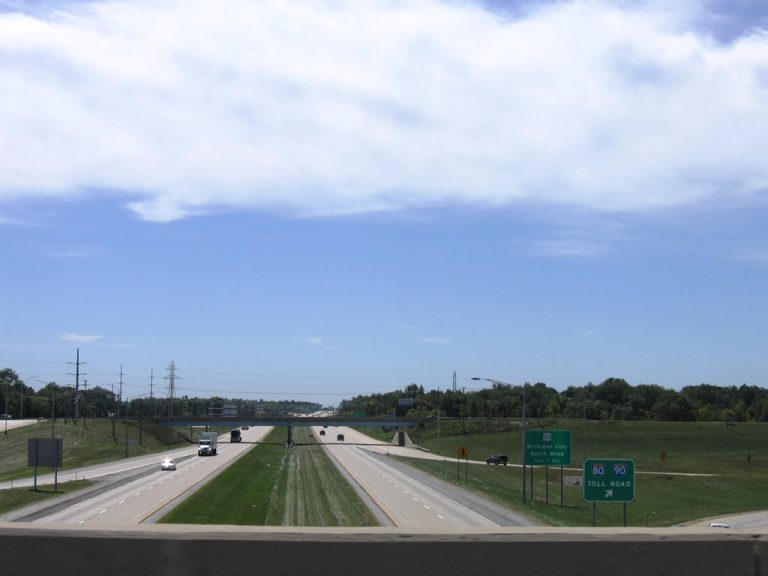 Looking southward at the U.S. 31 (St. Joseph Valley Parkway) freeway from the Plaza 72 access road between it and the Indiana East West Toll Road. Photo taken 09/02/05.

The St. Joseph Valley Parkway is a freeway bypass of the Michiana metropolitan area (South Bend, Mishawaka, and Elkhart). It was conceived as a bypass route for U.S. 20 and U.S. 31 and since the completion of the Parkway, those routes have been moved to the bypass with business routes inside the Parkway. Along with the Indiana Toll Road and Elkhart County Road 17, the Parkway completes of beltway of sorts around the Michiana Area. The name of the highway comes from the St. Joseph River, which flows through Elkhart, Mishawaka and South Bend before flowing up to Benton Harbor and into Lake Michigan. With that in mind, the highway applies to the U.S. 31 freeway in Berrien County, Michigan as well. The Michigan segment is mostly complete with the exception of a 2-mile gap that will connect it to Interstate 94. Despite the name, locals are more likely to call the highway as U.S. 31 to the west of the U.S. 31 South/Michigan Street interchange in southern South Bend, and U.S. 20 to the east of the interchange, or simply call it "the bypass."

The Parkway was built in several stages with the first segment from Indiana 2 to U.S. 20 completed in 1962. The segment from Indiana 2 eastward to U.S. 31 was finished by the mid-1970s and the part from U.S. 20 north to the Toll Road in 1979. In the 1980s U.S. 31 was rerouted to the new freeway. The segment from U.S. 31 east to County Road 17 in Elkhart County was worked on in the 1990s. Once this was finished U.S. 20 was rerouted to the new freeway. Throughout the years the highway had been signed as Bypass U.S. 20, though this designation is no longer official. Another way to judge the age of the highway is how it was constructed; the original sections from the southern U.S. 31 interchange to the west up to Michigan were done in asphalt while the section to the east out to Elkhart was in concrete. The Michigan segment was constructed over various years with the majority of it finished by 2003. Only a couple of mile stretch from Napier Road to Interstate 94 has yet to be completed. Plans are for a connection to be made in the next few years. Once that segment is finished and the Plymouth to South Bend U.S. 31 freeway is built, U.S. 31 will be a freeway from Plymouth to Holland, Michigan. The current highway appears like a modern urban interstate with a jersey barrier in the median throughout and a speed limit of 65. Despite that, the highway is mostly within rural/suburban areas of South Bend, Mishawaka, and Elkhart.

For additional information, some of which is sourced on the guides here, see Marc Fannin's "Routes in South Bend and Metro Northern Indiana."