Inventoried as U.S. 90-Z by LADOTD, the 13.87 mile route of U.S. 90 Business forms a hook-shaped route from U.S. 90 near Avondale to Interstate 10 and U.S. 90 by the Superdome and Downtown New Orleans. The bulk of U.S. 90 Business travels along the Westbank Expressway, which begins as an arterial route through Westwago. The remainder of the route east from Ames Avenue follows an elevated six-lane freeway to the Greater New Orleans / Crescent City Connection Bridges across the Mississippi River. The Pontchartrain Expressway extends U.S. 90 Business northwest directly to Interstate 10 by the B.W. Cooper neighborhood in New Orleans.

The Westbank and Pontchartrain Expressway portions of Business U.S. 90 double as hidden Interstate 910. The designation was approved by the American Association of State Highway and Transportation Officials (AASHTO) on October 1, 1999 for the freeway after a previous request to have the expressway incorporated to Interstate 49 was denied. The designation exists on paper only, as I-910 is not signed in the field nor referred to as such.

The GNO Bridge opened to traffic in 1958 as a toll bridge with two-way traffic. The 35 cent fare charged to motorists was dropped in May 1964 by then-Governor John McKeithen, who made good on a campaign promise. This led to the state paying for the bonds that financed the bridge.1 Explosive suburban growth of the West Bank followed, with traffic counts increasing from 30,000 vehicles per day (vpd) in 1963 to 57,000 vpd in 1966.

With the increase in traffic, demand for a second crossing to the West Bank grew. Efforts focused first on a new Uptown bridge near Napoleon Avenue, which was also considered as a part of the Riverfront / Earhart Expressway proposal. The Mississippi River Bridge Authority received permission from the Coast Guard for that location, but mounting opposition from Uptown residents ultimately shelved it.1

Governor McKeithen appointed a blue-ribbon committee to determine a location for a new bridge in June 1971. Three years of public hearings followed, with a site parallel to the GNO bridge recommended by August 1974. Accept by then-Governor Edwin W. Edwards, bids for the new span were taken by the state in 1982. The existing GNO bridge remained toll free as the state was flush with oil money.1

By the time the six-lane bridge opened to traffic on September 30, 1988, state finances were no longer as robust, and tolls were reimplemented at the crossing. Despite efforts from public officials and civic groups on the West Bank, which temporarily halted the impending tolls in October 1986, tolls were announced for the new bridge by then-Governor Buddy Roemer in early 1988, but with a three month grace period.1 Tolls commenced on the CCC bridge after midnight on January 4, 1989 at a rate of $1.00 per passenger vehicle.2 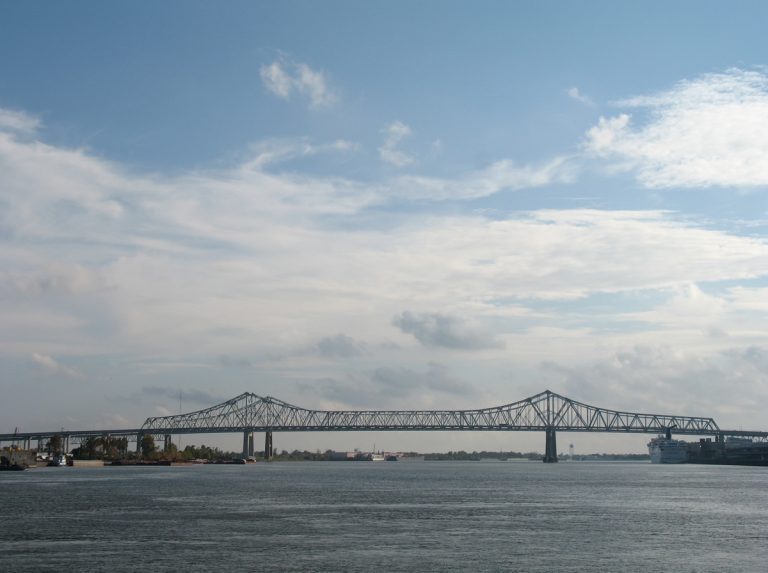 A 16-year, $471 million construction project replaced the viaduct of the Pontchartrain Expressway between I-10 and the Greater New Orleans Bridge with a modern six-lane elevated freeway between September 1980 and May 1996. The roadwork was incorporated in the 3 year, seven month construction of the Crescent City Connection bridge. It expanded the Pontchartrain Expressway with a new three-lane westbound viaduct, requiring the relocation or removal of several preexisting ramps.3 Work added new inbound ramps for I-10 west, Claiborne Avenue, Earhart Boulevard, Baronne Street, Magazine Street and Tchoupitoulas Street while the final phase added the reversible HOV-2 viaduct linking Downtown New Orleans with the Crescent City Connection Bridge.4

The West Bank approach to the Crescent City Connection bridge from the West Bank Expressway was completed on May 25, 1993. Completion of that link coincided with the redecking of the 1958 span and the new ramp for Tchoupitoulas Street.5

Tolls remained in place on the Crescent City Connection until a voter referendum held on May 4, 2013. The referendum rejected a 20-year extension of tolls at the crossing that was approved by just 18 votes on a November 2012 ballot.6 The West Bank toll plaza was subsequently demolished.