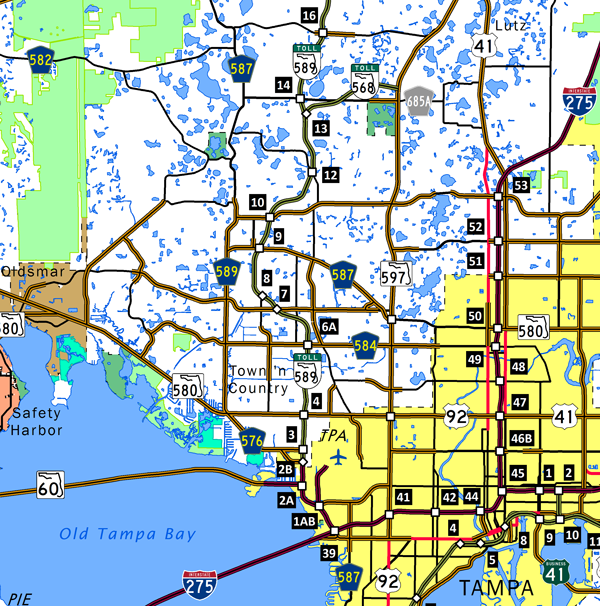 Years in planning, the Veterans Parkway was the result of a long proposed freeway corridor northwest of Tampa. Following community outreach and design changes, the alignment for the limited access road was decided in January 1987. Other alignments considered for the expressway included utilizing Dale Mabry Highway, which would have been prohibitively expensive. Constructed between August 1992 and September 1994, the toll road runs from north from SR 60 (Memorial Highway) to SR 597 (Dale Mabry Highway) in Lutz.

The Suncoast Parkway extends State Road 589 northward through Pasco County to Brooksville and U.S. 98 near the Citrus County line. Work commenced on a two phase $507 million project in Summer 1998. The first phase was finished in February 2001 between the Veterans Expressway and SR 50 between Weeki Wachee and Brooksville. Completion followed in August 2001 to U.S. 98.1

Tolls charged on the Veterans Expressway and Suncoast Parkway increased by 25% on June 24, 2012 alongside hikes on other Florida's Turnpike Enterprise roadways. The toll addition funded improvements including additional lanes in congested areas, conversion of outdated toll plazas to all electronic toll collection and system wide interchange improvements.3

A $380 million project finished in Spring 2018 upgraded an 11 mile section of the Veterans Expressway. Work rebuilt the entire toll road, with widening of the expressway from four to eight lanes between SR 60 (Memorial Highway) and CR 587 (Gunn Highway), and provisions to expand the road north from Gunn Highway to Van Dyke Road (CR 685A) to eight lanes.6 The lane additions include a Thru Lane, with limited ingress and egress points, along each direction of SR 589. The Thru Lanes were previously Express Lanes with expected higher toll rates vary depending upon traffic flow on the general travel lanes. No additional charges are levied for using the Thru Lanes.

The Veterans Expressway Thru Lanes run northbound from SR 580 (Hillsborough Avenue) to SR 568 (Dale Mabry Highway connector) and southbound from SR 568 to Memorial Highway (CR 576). An ingress and egress point is located between Wilsky Boulevard (Exit 8) and Gunn Highway (Exit 9). The first phase of the Thru Lanes opened to traffic on December 9, 2017 between Hillsborough Avenue and Gunn Highway. The second phase, extending north three miles to SR 568, opened in Spring 2018.

Previously thought to start in Spring 2016 and finish in 2019,2 construction to lengthen the Suncoast Parkway north from U.S. 98 to State Road 44 east of Crystal River got underway on February 12, 2018. The $134.6 million project added 13 miles of the planned 27 mile Suncoast 2 extension. As part of the parkway expansion, full interchanges were constructed at U.S. 98 and Cardinal Street with a half diamond interchange built at State Road 44. The multi use Suncoast Trail was also extended, with completion expected in April 2022.10 Work was schedule through March 3, 2022.5 Suncoast Parkway opened north to SR 44 following a ribbon cutting held near the exchange with SR 44 on February 28, 2022.10 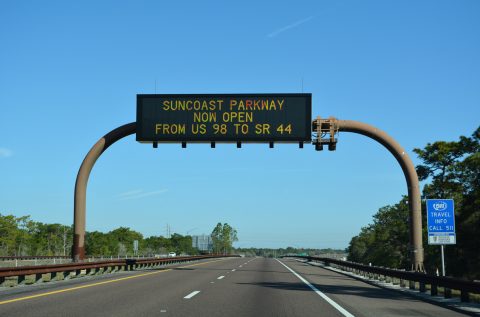 The second phase of the Suncoast 2 extension, from SR 44 three miles to County Road 486 moved forward with $86.6 million in funding for FDOT District 7's five year plan in December 2018. The bulk of right of way needed for the roadway is already reserved based upon late 1990s plans for extending the parkway to U.S. 19/98 north of Crystal River. The five year plan outlined $3 million in 2020 for planning, engineering and additional right of way acquisition, plus potential design to continue the roadway north to U.S. 19/98. Allocation of $18.2 million in 2022 covers added right of way and utility relocation costs, and $65 million in 2024 funds construction.8 A boost in funding accelerates construction, which is slated to begin in early 2023.10