Interstate 15 travels 393.030 miles from the Idaho state line at Monida Pass to Alberta, Canada at Sweet Grass. Connecting three of the top six most populated metropolitan areas in the state, I-15 connects the Rocky Mountains with western reaches of the Great Plains as both a freight corridor and travel route for tourists headed to Glacier National Park.

Entering the Glacier State from the south, I-15 crosses the Continental Divide into Beaverhead County. The lightly traveled freeway curves northwest into a broad valley fed by the Red Rock River east of the Tendoy Mountains and north to Clark Canyon Reservoir. Turning back to the northeast, Interstate 15 parallels old U.S. 91 and the Beaverhead River to the east to an agricultural area spreading south of Dillon. Dillon represents the first traveler services since Idaho and the first Business Loop for I-15 in the state.

Heading north from Dillon, I-15 passes through another agricultural area before climbing along a series of hills to the Big Hole River east of Sugarloaf Mountain and west of Bell Peak. Old U.S. 91 remains to the west as a through route to Melrose along the Big Hole River while the freeway rides along the hillside to the east. Crossing into Silver Bow County, which merged with the city of Butte to form a consolidated government in 1977, Interstate 15 winds between Old Glory and Goat Mountains to Montana 43 at Divide.

I-15 enters the Butte area east of Deerlodge National Forest and Fleecer Ridge. A trumpet interchange joins the freeway with Interstate 90 by Nissler, with the two combining east to Rocker, Williamsburg and the south side of Butte. Interstate 115 forms a short spur to Montana Street, which leads Business Loops I-15 & 90 north to Downtown Butte. The main commercial strip for the city lines Harrison Avenue and Montana 2 leading south from Floral Park, just west of where I-15 splits with I-90 east for the continuation north toward Helena and Great Falls. 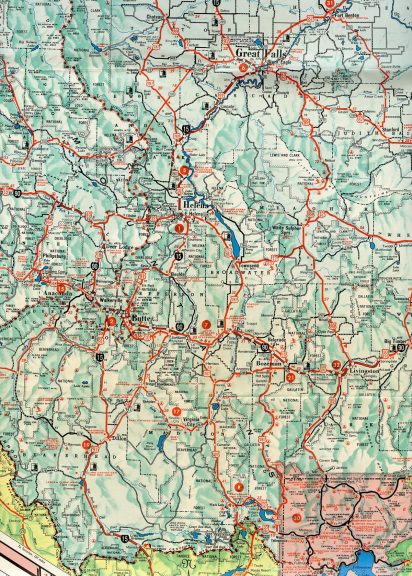 Interstate 15 rises in elevation to Elk Park Pass, where the freeway again crosses the Continental Divide. A southbound view area provides a look at Butte and the massive Berkeley Pit quarry. I-15 otherwise advances north through Elk Park valley east of Rampart and Sheepshead Mountains.

A winding stretch takes I-15 north through Bison Canyon and Deerlodge National Forest to Indian Head Rock and Basin. The route turns east-west along this stretch as it straddles the Boulder River before emerging above agricultural areas of Boulder Valley. Resuming a northward heading, I-15 winds across the Boulder Hills to Jefferson City and Clancy before crossing the Lewis and Clark County line and descending into the capital city of Helena.

The bulk of Helena spreads west of I-15, with the freeway combining with U.S. 287 north from U.S. 12 (Prospect Avenue) by Helena Regional Airport (HLN). A poorly signed business loop also serves Helena as it follows a number of streets by the state capitol building and through Downtown.

I-15 & U.S. 287 bee line northward across farm and ranch land west of Lake Helena to Sawmill Gulch, where the tandem ascend between Cooper Butte and Rattlesnake Mountain. Long straight aways take the freeway northwest through Hilger Valley ahead of the narrowest stretch in the state, where I-15 parallels Little Prickly Pear Creek north from Sieben to Wolf Creek.

U.S. 287 branches west to Augusta and its northern terminus at Choteau while Interstate 15 angles northeast along the Missouri River to Cascade, Ulm and the city of Great Falls. Circling around the west side of Great Falls, I-15 sees for exits for the largest city in northern Montana. I-315, a short freeway spur signed as part of Business Loop I-15, U.S. 89 and Montana 3 & 200, provides a direct route to the main commercial district of the city.

Progressing northwest from Great Falls, U.S. 89 and Montana 200 accompany Interstate 15 to Vaughn as the trio parallel the Sun River. I-15 then turns more northward, traversing the edge of a plateau east of Muddy Creek and south of the Teton County line. The remainder of the route north travels generally across open ranch land and oil and gas fields with long sight distances. Business loops provide access to the larger population centers of Conrad and Shelby. Interstate 15 ends at a port of entry linking Sweetgrass with Couts, Alberta and Highway 4 leading north to Lethbridge.