Interstate 90 opened between Northwest Boulevard and Sherman Avenue in Coeur d'Alene in 1960. It was initially referred to as the Coeur d'Alene belt route as it encircled the then edge of town.1 A $5.05 million, 5.6 mile stretch of I-90 leading west from Post Falls to Washington was dedicated on October 22, 1970.2

The freeway was completed through Coeur d'Alene when the Veterans Memorial Centennial Bridge opened to the east: The westbound lanes of the new bypass opened in July 1992; the eastbound lanes in August 1992.1 This stretch of freeway replaced an older section of I-90 along the immediate shoreline of Lake Coeur d'Alene between Sherman Street and Blue Creek Bay. That segment of roadway is now Coeur d'Alene Lake Drive, a two-lane access road and hiking/biking trail. The Potlach Hill Road overpass above the drive is a remnant from the original Interstate 90 alignment.

Through Wallace, a small city at Exits 61 and 62, Interstate 90 was completed on September 12, 1991 when a 4,400 foot viaduct bypassing town opened to traffic. The 1970-plan for Interstate 90 took the freeway through the city street grid, but without the filing of an environmental impact statement.3 That and efforts from city officials added the entire town to the National Historic Register in 1976,4 leading to the revised plan for an Interstate 90 bypass along the hillside above the South Fork Coeur d'Alene River. 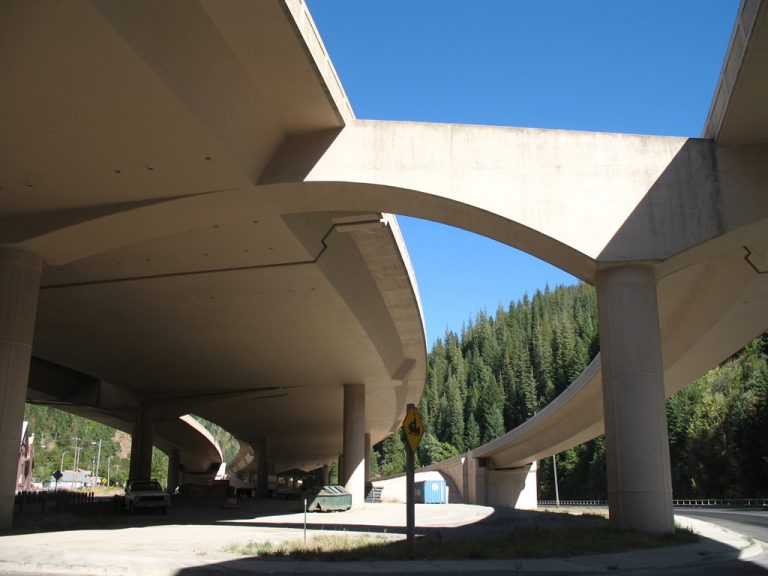 Ramps to Business Loop I-90 and Idaho 4 descend from the Interstate 90 viaduct as it passes above Buena Vista Heights in Wallace. Photo taken September 1, 2006.

Completion of the 30 foot high viaduct above Wallace led to the removal of the last traffic light along the nearly transcontinental journey of I-90, which was celebrated with a three-day event, including a horse-drawn hearse and a mock burial for the signal.5 A set of traffic lights still hang at the intersection of 7th and Bank Streets in Wallace, but are only operated in flashing mode. The signal used in the celebratory funeral in 1991 was a one-piece four-way signal used previously. It now resides within a coffin at the Wallace Mining Museum.

A new diamond interchange (Exit 1) opened between Interstate 90 and Beck Road on November 22, 2012 after five months of construction.6