Arizona Loop 303 is the outer loop of the Phoenix metro area, serving as a bypass of the West Valley. The 36.03 mile route connects Interstate 10 at Goodyear with I-17 in northern reaches of Phoenix. Loop 303 begins at an at-grade intersection with Van Buren Street south of a multi level interchange with I-10, and proceeds north along a six to eight lane freeway to U.S. 60 at Surprise. The freeway then follows a stair-stepped course through Peoria and northwestern reaches of Phoenix, ending at I-17 opposite Sonoran Desert Drive. Loop 303 doubles as the Bob Stump Memorial Parkway its entire length.

In 1993, due to the funding shortfall, Loop 303 was slated for removal from the state highway system. Maricopa County went to the Arizona Department of Transportation (ADOT), and offered to maintain and construct the roadway to preserve the route, as long as the road remained in the state highway system. MCDOT (Maricopa County Department of Transportation) maintained the roadway from 1995 to 2006, and extended the completed section northeast to Happy Valley Parkway by 2004.

Following the passage of Proposition 400, ADOT resumed maintenance of the highway, and started work on the final link from Happy Valley Road to Interstate 17. Construction on the interim freeway began in 2009, and was completed in 2011. Loop 303 was constructed as a four lane freeway, with through lanes utilizing the future exit ramps.

Built in phases, the four level interchange with Interstate 10 was finished by October 2017 when the final $64 million project connecting the four remaining ramps of the exchange was completed.1

Future plans call for a four mile southern extension of Loop 303 from Van Buren Street to the proposed State Route 30 freeway. With construction originally set for Fall 2020, the project has been indefinitely delayed.2 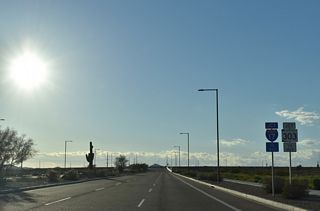 Sonoran Desert Drive passes over Skunk Creek on the half mile drive to Interstate 17 and Arizona Loop 303 west to Peoria and Surprise.
03/02/19 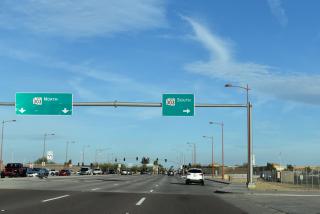