Construction for the U.S. 301 Toll road around Middletown realigned SR 299 (Warwick Road) onto a frontage road leading north from the Maryland line. Running along the west side of the expressway, SR 299 hooks into an a diamond interchange with U.S. 301 and an extension of Levels Road.

A two year project anticipated to begin in 2019 will improve capacity along SR 299 in Middletown. Expansion widens the state route into a five-lane boulevard with a continuous center turn lane from Catherine Street to Cleaver Farm Road, and a four-lane divided arterial from Cleaver Farm Road to SR 1.

The east-west route from the state line near Warwick, Maryland to Middletown and Odessa was designated as SR 4 by 1938. MD 299 south through Warwick to Massey was established by 1942. Mid-1950s construction of MD 71 from U.S. 50 at Queenstown to the Delaware state line by Warwick, coincided with the renumbering of SR 4 east to Odessa as SR 299 in 1957. The 1959 extension of SR 9 north to Wilmington also included lengthening SR 299 east from Downtown Odessa to Mathews Corner. 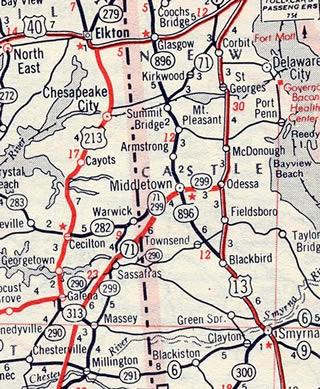 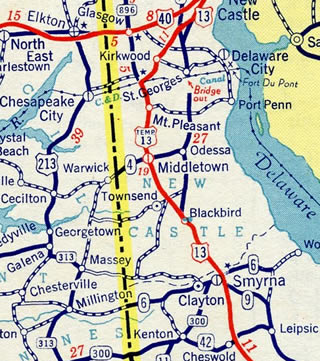 SR 71 was realigned to form a multi state route with MD 71 as U.S. 301 was extended to Delaware in 1960. Sassafras Road was subsequently decommissioned as MD 299 between the new U.S. 301 and Cecilton Warwick Road (MD 282). MD 299 east through Warwick was renumbered as an extension of MD 282, creating a numbering anomally with SR 299. Within the First State, U.S. 301 separated into north and south branches between Middletown and Tybouts Corner. U.S. 301 North overlapped with SR 299 east to Middletown until 1971.

SR 71 was dropped from its overlap with U.S. 301 and SR 299 southwest from Middletown after 1984. SR 15 was added along both routes from Levels Road to Bunker Hill Road in 1993. Construction of the new arterial bypass for U.S. 301 west of Peterson Road reconfigured Middletown Warwick Road, Main Street and Bunker Hill Road into a new intersection by the following year.