Interstate 585 overlays 2.25 miles of U.S. 176 (N Pine Street) from U.S. 221 (Whitney Road) northward from the Spartanburg city line to Business Loop I-85 near Lone Oak. The designation is unique in that it spurs southeast from an Interstate Business Loop instead of a parent or branch route. This was not always the case as Business Loop I-85 was the previous alignment of Interstate 85 until October 1995.

Exit numbers along Interstate 585 use the mileposts for U.S. 176 starting from the North Carolina state line northwest of Landrum. The expressway along U.S. 176 (N Pine Street) extends northwest from Business Loop I-85 to Fairforest Road, just shy of I-85.

Plans were made to extend the Interstate standard portion of U.S. 176 all the way to I-85 as part of a two phase project announced in 2001. Work focused on upgrading N Pine Street between I-585 and Valley Falls Road. Construction included the removal of an at-grade intersection with Tenosha Drive, access and capacity improvements to roads leading to the adjacent USC Upstate campus, conversion of the interchange with Valley Falls Road from a folded diamond to a full diamond, relocation of Hodge Road to no longer intersect U.S. 176 and the realignment of ramps with Business Loop I-85.1 The $63 million project commenced in 2003 and was completed at a ribbon cutting ceremony held on October 25, 2006.2 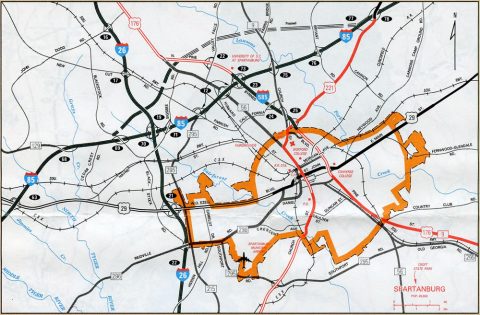 Until 1995, Interstate 585 directly connected with I-85. The 1991 South Carolina Official Highway Map shows the new alignment for I-85 partially under construction. 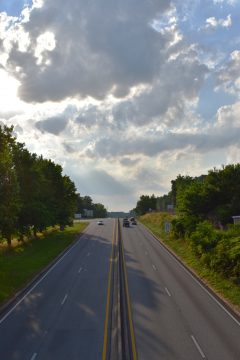