these photos go very far back – to a trip I took in December, 2007 … crossing the Rocky Mountains and the Continental Divide several times, including a dead-of-night blizzard trip across the treacherous Million Dollar Highway in western Colorado!

here is the first day of that trip – the Bay Area to Arco, Idaho. 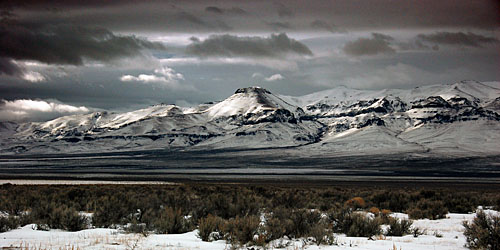 The Sierras, in southeast Oregon. Just about the northernmost extent of this mountain range. 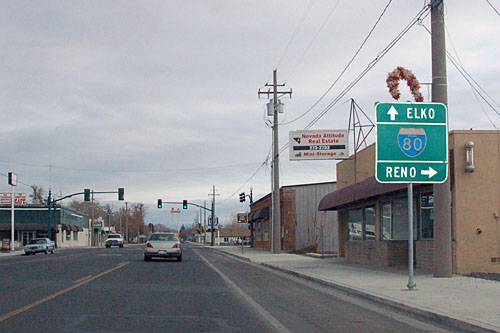 Not an incredibly old sign, but likely 1980s. Note the state name on the 80 shield – Nevada doesn’t often do that for green guide signs. 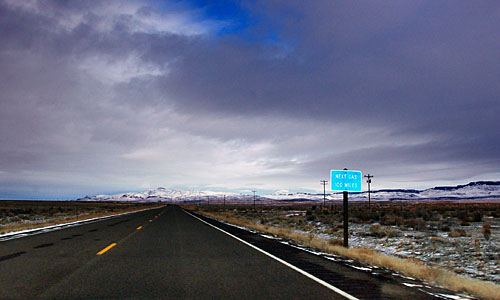 Between nothing and nowhere. 95 goes through a very barren and remote section of southeastern Oregon and I was hoping for old signs… alas, no such thing did I find. As far as I know, there are no more OREGON/US cutout shields left. The last one was a 97 in Klamath Falls. There are some of the state route eagle shields left, however. 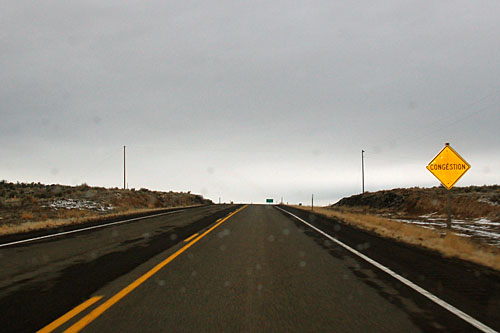 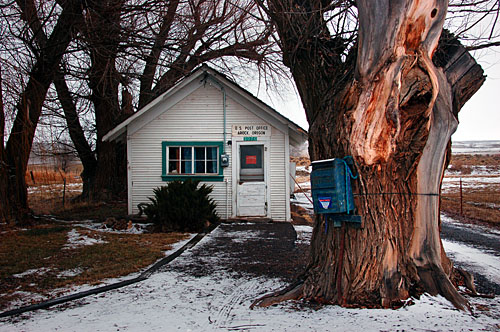 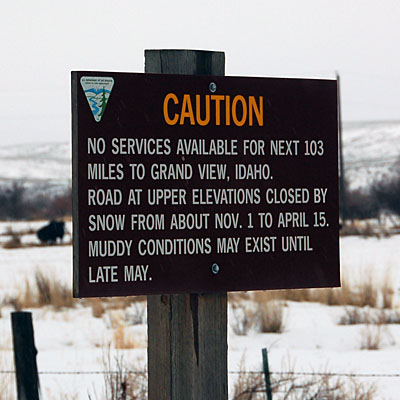 Now that is a remote road. It’s a 4×4 trail between eastern Oregon and western Idaho. Interestingly, it is labeled on the Rand McNally map, but good luck with actually taking it! 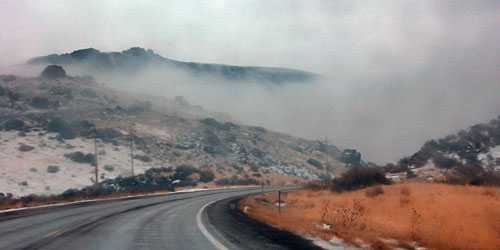 We’re in Idaho now, and the precipitation keeps getting worse. 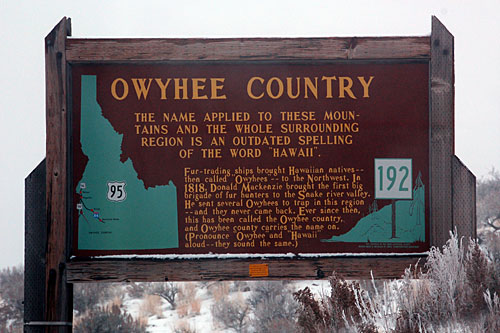 Old Idaho historic marker. Note the narrow fonts on the US-95 shield and the number 192 (which identifies this particular marker). 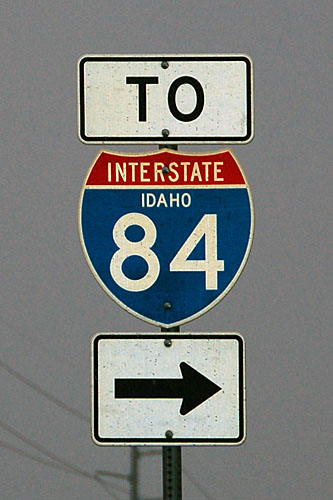 How about a state-named Idaho shield? They are very rare, but here’s one in Boise. There are three altogether in the same area, and they are all brand new. 2005 or so vintage. 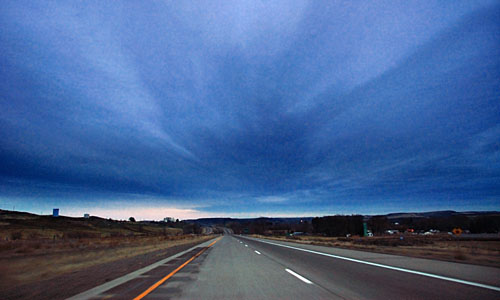 Snow clouds at dusk. I-84 eastbound near Twin Falls, Idaho. 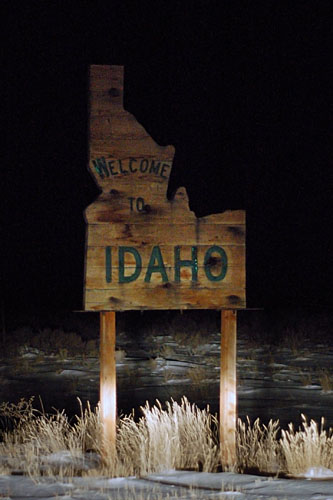 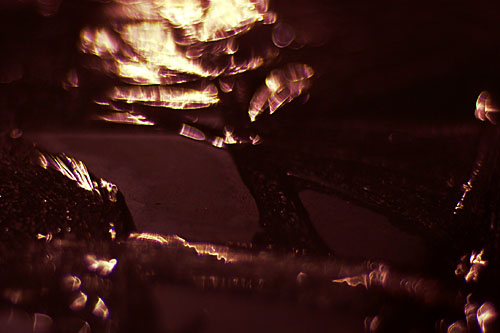 Identify this matter. It is ice on the top of a steel gas pump, in the appropriately named Snowville, Utah. I do not remember how the place was lit up to provide this effect. 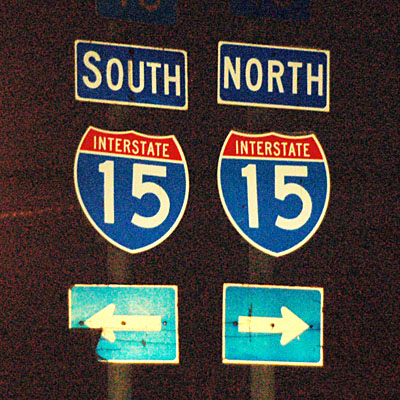 The last state-named shields in Utah. Where? Under these two. Note the original 1960s wooden arrows. The new aluminum signs were simply bolted onto the older wooden ones! 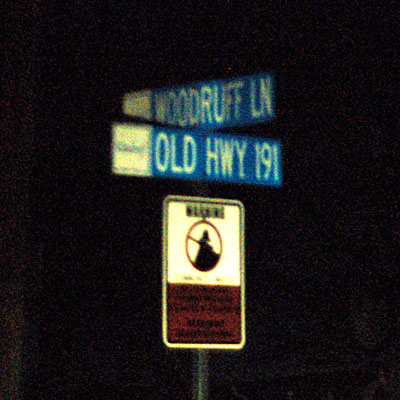 Another section of old US-191. 191 is a strange one: it originally went from Yellowstone to Salt Lake City, and then it got truncated (thus the “old” remnants) around southern Wyoming… and then it got extended, to many times its original length. It now goes from US-2 in northern Montana all the way to the Mexico border in Douglas, Arizona. It ends up not even intersecting the severely truncated US-91, which it once connected to. 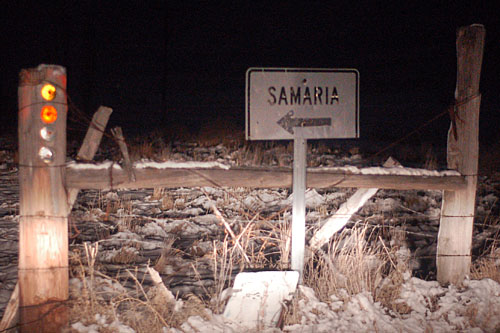 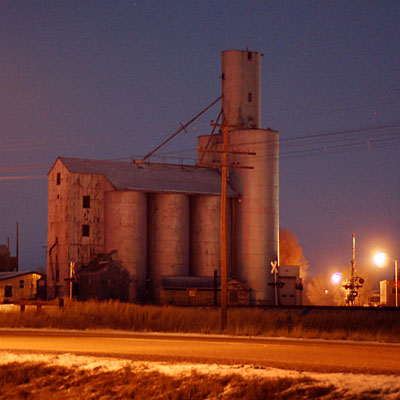 Grain elevator by the side of old US-91 somewhere in southeast Idaho. 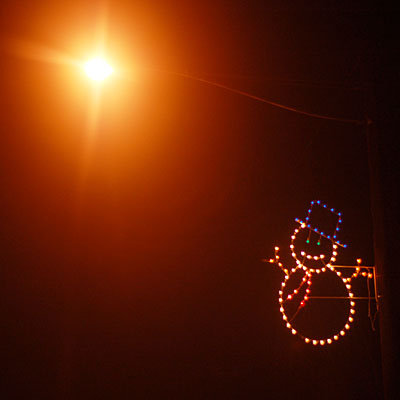 Christmas decorations in rural Idaho, two days before the holiday itself. 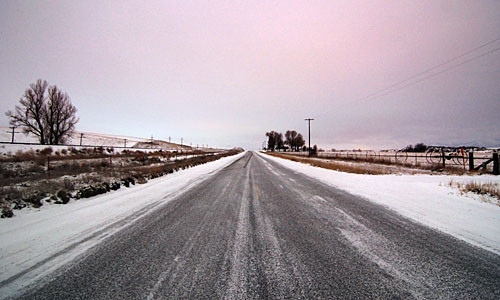 Old US-91 in the middle of the night. Note the snowglow in the air – a full moon is reflected off the ground, and then again the clouds in the sky… it was bright enough at midnight to drive without headlights!

And that’s all for our run from the bay area to Idaho in one night and one day and a bit of another night. Next up, we pick up in Arco, Idaho – and head north into Montana on US-93. Lost Trails Pass, Inflatable Biker Santa, old signs along US-10, and of course snowstorm after snowstorm.