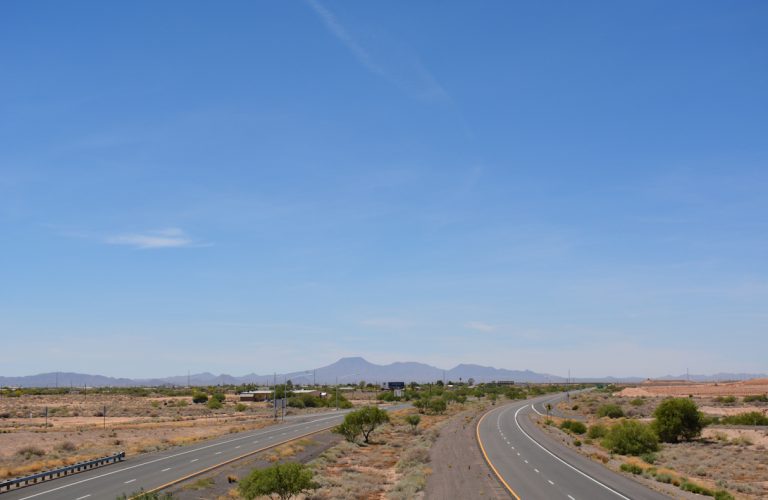 Interstate 8 crosses the Colorado River into Yuma, Arizona. Yuma is the agricultural center of southwest Arizona, known for its warm temperatures (in the Summer, Yuma routinely is the hottest city in the state). Yuma's population grows by 100,000 during the Winter as snowbirds flock to the warmth and sun. While the majority of Yuma is within the first three miles of I-8, the "suburb" of Yuma called The Foothills is located at Exit 12. Yuma is also known for the strong Marine Corps presence, with MCAS Yuma and the Yuma Proving Ground located around the city.

Heading east, I-8 climbs into the Gila Mountains and enters Telegraph Pass. The original route of U.S. 80 bypassed these mountains and hugged the river, while a 1928-30 realignment brought U.S. 80 through Telegraph Pass. When I-8 was constructed through the pass, terrain dictated the present design which includes a "Wrong-Way" section where the westbound roadway crosses the eastbound lanes.

Dateland is home of date shakes, followed by Aztec and Sentinel. Between Dateland and Sentinel, the only traveler's service (an old Stuckeys) closed in 1984 and has long since been demolished. Gila Bend is located where the Gila River bends west (from a south flow). The town has long been a travelers waypoint, as well as a farming community. Several motels and gas stations are in town, including the Best Western Space Age Lodge, with a flying saucer atop the building.

Interstate 8 breaks away from old U.S. 80 at this point and heads east, paralleling old Arizona State Route 84. While U.S. 80 continued northeast into Phoenix, I-8 bee lines east toward Casa Grande. The next 59 miles are lightly trafficked as most of the thru traffic takes SR 85 (old U.S. 80) north to Buckeye where it connects with I-10 into Phoenix. Interstate 8 passes through the Sonoran Desert National Monument for 45 miles, a monument established in 1996 by President Bill Clinton. No traveler services are available within the monument.

I-8 has the longest exit less section of interstate in Arizona - miles 119 to 140 have no exits. While Phoenix is 40 miles north of Interstate 8, it seems a world away when driving the freeway. The next junction is SR 84, which parallels the newer interstate into Casa Grande. SR 84 links I-8 east with SR 347, which travels through the Ak-Chin Indian community and Gila River Indian Reservation to reach Interstate 10 just south of Chandler and Phoenix.

Interstate 8 stays south of Casa Grande, then unceremoniously ends at I-10 within southeastern reaches of the Casa Grande city limits. Most traffic continues east on Interstate 10 towards Tucson and El Paso.

Interstate 8 replaced U.S. 80 between Yuma and Gila Bend, and State Route 84 between Gila Bend and the present west end of SR 84. There are two business loops from Interstate 8. The loop through Yuma extends south from Winterhaven, California and east along former U.S. 80 to Exit 9. The loop through Gila Bend overlays old U.S. 80 and old SR 84.