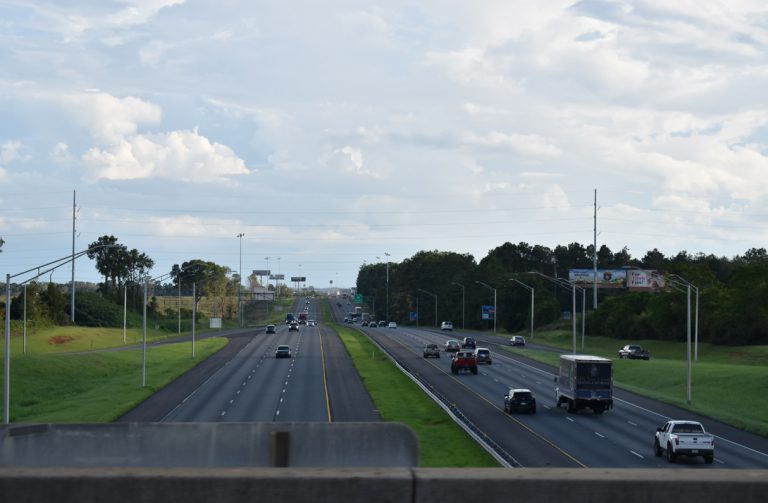 Traveling the length of Georgia, Interstate 75 runs southeast from Chattanooga, Tennessee by Dalton and Marietta to the capital city. Through Atlanta, I-75 joins Interstate 85 for 7.40 miles along the Downtown Connector with as many as 16 lanes. Continuing southward, I-75 heads to Macon, Tifton and into North Florida beyond Valdosta. With the exception of a segment in Macon, the entire I-75 corridor in the Peach State is at least six lanes wide. Regionally, the freeway along with along with Interstate 475 around Macon, plays an important role in long distance travel between the Great Lakes region and the Florida Peninsula.

Original plans for the Interstate System in Georgia routed Interstate 75 directly from Perry to Forsyth. Local officials in 1963 persisted in securing right of way through Macon, bringing I-75 to the city. Construction through Macon took eight years, coupled with both work on Interstate 16 leading southeast and I-475 bypassing to the west.8 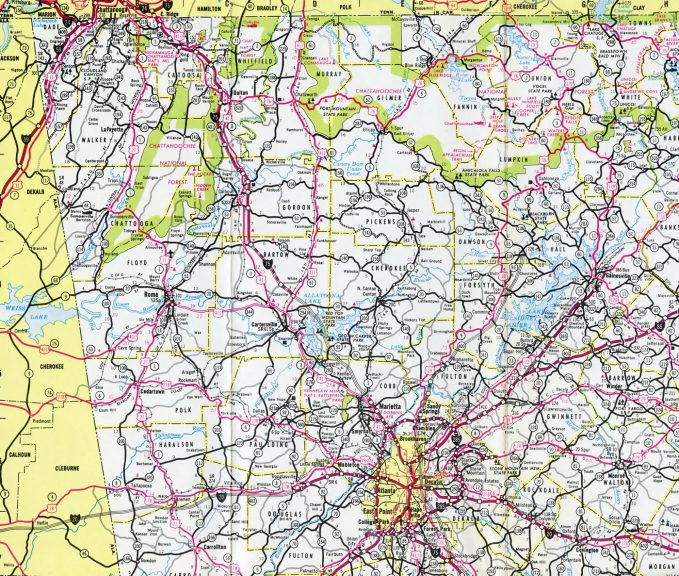 Interstate 75 was fully opened to traffic in Georgia with the exception of the stretch between Marietta and Adairsville by 1970.

Work along Interstate 75 during the "Freeing the Freeways" program outside the Downtown Connector in Atlanta started in 1982 and ran through August of 1987. Costing $128 million and spanning 11 separate contracts, I-75 was rebuilt from I-85 northwest to the Perimeter Highway. Work included the redesign of the Brookwood Interchange (where I-75/85 converge), the replacement of the left exit ramp to Howell Mill Road from southbound and doubling the capacity from four to eight overall through lanes.1

Reconstruction of the Brookwood Interchange cost $64 million. The project expanded capacity at the trumpet interchange by increasing the number of lanes for both I-75 and I-85 from four to eight lanes. Work was slated for completion in November 1985, but was delayed until November of 1986 due to problems with rebuilding several bridges and the relocation of utility lines.2,3 Further south along the Downtown Connector and commencing in 1985, was a rebuild of the Capitol Hill Interchange, where I-75/85 meet Interstate 20. The $107.4 million6 redesign started in 1985 and ran through November 1988. Work eliminated several left exits ramps and expanded the Downtown Connector to ten overall lanes below I-20.2 A 1,000 foot long tunnel supporting a parking deck at Memorial Drive and Capital Avenue was also constructed along the Connector during this time.6

Additional work along the Downtown Connector replaced the left exit ramp from I-75/85 north to International Boulevard with a new ramp departing from the right. The original off-ramp closed September 19, 1986, with its replacement open in 1988.4 The Peachtree Street overpasses were demolished and replaced between September 27, 1986 and a 12-month period as well.5

Interstate 75 was restriped with existing lanes reduced from 12 to 11 feet to accommodate new left side HOV lanes between May 1995 and May 31, 1996. The $40 million project was part of the overall resurfacing of all travel lanes along 60 miles of I-75 and I-85 in time for the 1996 Summer Olympic Games held in Atlanta. As a result of this project, all preexisting left exit ramps became restricted to HOV-2 based traffic. This included Interstate 75 at Northside Drive and Aviation Boulevard and Downtown Connector ramps for Williams / Spring Streets, Piedmont Avenue, Pryor Street and Memorial Drive.6